I just wanted to hold him tight and never let go. I wanted to make sure he would come back and I wanted to scream at him for untangling the ‘not’s in my chest.

I am 22. Bisexual. Bipolar. Chronically Anxious. Developing feels for a straight man I met off Tinder.I am as millennial as they come, as you know already from the title. Which is ironic, because I still indulge in hand-written letters, believe in a love that is forever, want to adopt children and grow carrots in a farm far away in a beach-town.----- Like most Tinder dates, I expected decent sex and under-decent conversations (developed for the sake of not making the other person feel like a vibrator with a voice). He came over at midnight, and from what I remember- it was an impulsive decision to call him over which he complied with. I opened my door to a cute lanky brown boy with cropped hair, and I knew straight away the sex was either going to be hot or awkward. He is the trope I grew up fantasizing about, and would have fallen madly in love with 2 years ago. But those 2 years happened and my mental health hasn’t let me feel positive emotions for a while.I have been with a couple more people since, and hence the hot details of the hot sex aren’t what rush to my mind when I think of the first time I met him. I do remember the fact that he smoked during a break only because I had told him about my libido that rages at the smell of nicotine. I remember how his hands felt on my ass, and I remember how I felt when he didn’t stay over: I wanted to fuck more, I wanted to keep kissing his arm softly, I wanted to breathe into his skin, I wanted morning sex. That’s how I felt.Skip past some generic texts exchanged, a couple of hot-headed blocking from my end, a few missed calls, a text that said ‘later Prerana’ and an apology from my side to the part where I met him another time recently; probably after 2 weeks from first seeing him.As had happened the last time, he came over late at night: the perfect time to fuck and pretend to be more than strangers. We obviously had sex, and this time we tried a blindfold that came (off) before he did. Despite my extreme case of low BP, back issues due to anxiety and the surprise upset stomach that had taken over my life that night, the sex was good and I liked feeling his sweaty body against mine. I liked how his breath smelled of weed and how cute he was when I had said, ‘I just puked’ while we were kissing.We fucked from behind and we fucked by the window and we fucked on the mattress and he came and then he suggested we get ice cream and go to the dockyard near my place. By this time in the night, my mind forgets the binaries of social conduct- oscillating awkwardly between ‘Fuck off babe, we are just strangers’ and ‘Hell yeah! I will even adopt children with you, my carrot farm person’. I didn’t oscillate at his suggestion though. I did want to go to the dockyard with him. I did want to know if he ate his ice-cream super-slow or super-fast. I did want to know what it felt like the first time he had masturbated. I wanted to sit by the waters and watch him watch the world.Amidst all this- was a conversation, where he asked me what my kisses meant post-sex because they ‘felt different’ to him. I wanted to whisper to him how the kisses meant that my anxiety was temporarily shut; that my chest was learning to feel light again; that I was beginning to accept compassion; that I wanted to love and be loved by a stranger I had only met for the second time.Instead, I kissed him more because honestly, that’s all I wanted to do for the rest of the night. I wanted to kiss him like I meant it and I wanted him to accept my lips and touch me like he meant it. I am not sure if the latter happened.For the first time in months, I was curious about another human being. My chest grew lighter at the idea of this curiosity. I wanted to give myself another chance to feel positive emotions. And so, we rode around on his borderline-hipster-borderline made-of-my-wet-dream yellow Vespa and even though I have been more romantic in the past years, I feel like I did good. We couldn’t make it to the docks or buy ice-cream, but we got chai at 1 am and I caught his eyes looking at me while I (almost) looked away. What a cliché, right. My 19-year-old self would have cum just at the idea of such a night, but my 19-year-old self also wasn’t diagnosed with a mental health issue that couldn’t let her feel her own veins when falling in love.I didn’t know what I felt that night, but I invited him over (again) after the ride. He was skeptical earlier, but a little lust for ghar ki khichdi and ‘We can hang. With our clothes on’ seemed to be a great lubricant. He stood opposite to me in the lift, and when I tried kissing him- he looked for a CCTV. I hadn’t even thought of that. I just wanted to kiss him in as many spaces as possible, because I knew the chances of meeting him another time were bleak and my heart needed something to remind it of its own capacities. He served himself the khichdi while I insisted on heating the chicken I had cooked. We went into the room and made some conversation about things I’m forgetting now. He did say the khichdi gave him enough energy to fuck again, and so we went at it. Ofcourse the sex was great. He even ate me out and I came – which hadn’t happened since the last girl I was with- so I wanted to simply hug him and thank him for how great my next few days were going to feel.Especially since my my mental health diagnosis, I have forgotten what it feels like to have a slow song stuck in my head while I walk alone on busy streets. What must that feel like: liberating, lonely or lustful; I would only know in the days that followed.----- 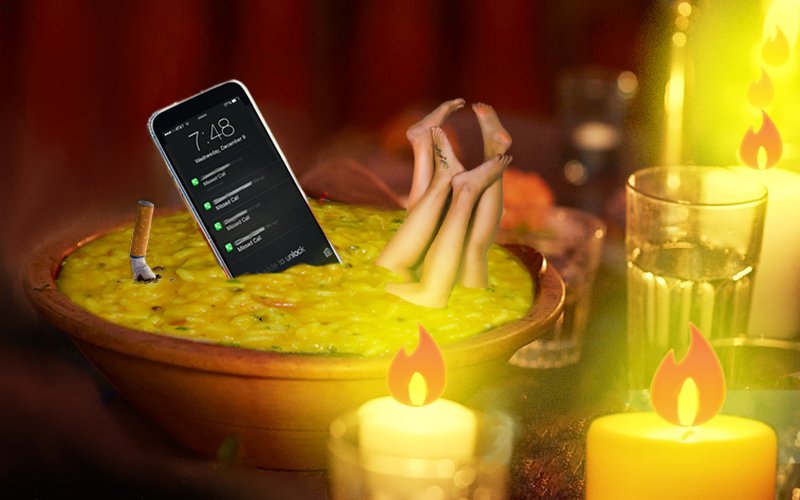 As is ritualistic of Tinder conversations, we also talked about the other people we were seeing; while I told him about the other two in my life, he said wasn’t sleeping with anyone else even though there were some willing to do that. I would imagine. He is a pretty brown boy who wears those circular hipster specs, and makes music for a living.‘Why haven’t you slept with the others?’ I asked, partly out of curiousity, and partly out of the need to continue the conversation and not let him leave my arms. ‘Because I recently started liking someone. Not sure where it is going, though.’ He said. I remember him smiling while saying this, but I guess it was just the high from weed, sex and khichdi. I was confused: ‘But you’re sleeping with me’. ‘I like you,’ He justified, looking away from my face.When he didn’t stay over this time, I didn’t feel hornier. I wasn’t craving sex. I didn’t want morning sex. Actually, I did want morning sex, but that was meshed amidst a feeling of wanting to kiss him a ‘Goodnight’ and hug him a ‘Good-morning’. I wanted to cuddle and I wanted to spoon and I wanted to lick his back in the middle of the night because I remember how my licks bothered him in a playful manner. I wanted to lick him clean of all the damage he seemed to laugh about earlier that night.I felt like a trope: broken boy and his manic pixie. What a romantic glitch in my otherwise feminist life. My politics of condemning this particular trope is one of the reasons I am apprehensive of relationships: ‘What if I end up indulging in excessive emotional labor only because I have been structured to be the ‘caregiver’ in a relationship?’. I don’t know, none of these apprehensions seemed to have cropped up that anxious midnight.I just wanted to hold him tight and never let go. I wanted to make sure he would come back and I wanted to scream at him for untangling the ‘not’s in my chest.It's been a week since that happened, and the ‘not’s are still dangling loose- but with some added ‘K’s.Prerana only understands the language of words and sex. On days she wants nothing to do with either, she tries to paint Queer/feminist art, cook regular Indian sabjis and stare at her cat do nothing but sleep for 20 hours straight. (Only thing 'straight' she appreciates heh)
Score: 0/
anxiety mental sexual health AOI personal stories bipolar bisexual casual sex consent desire love relationship romance sex talk sexual self sexuality
Follow us: Corona Pyaar Hai! Some Don'ts, and Some Do's During Isolation Navigating sex & intimacy during a pandemic  04, Apr 2020 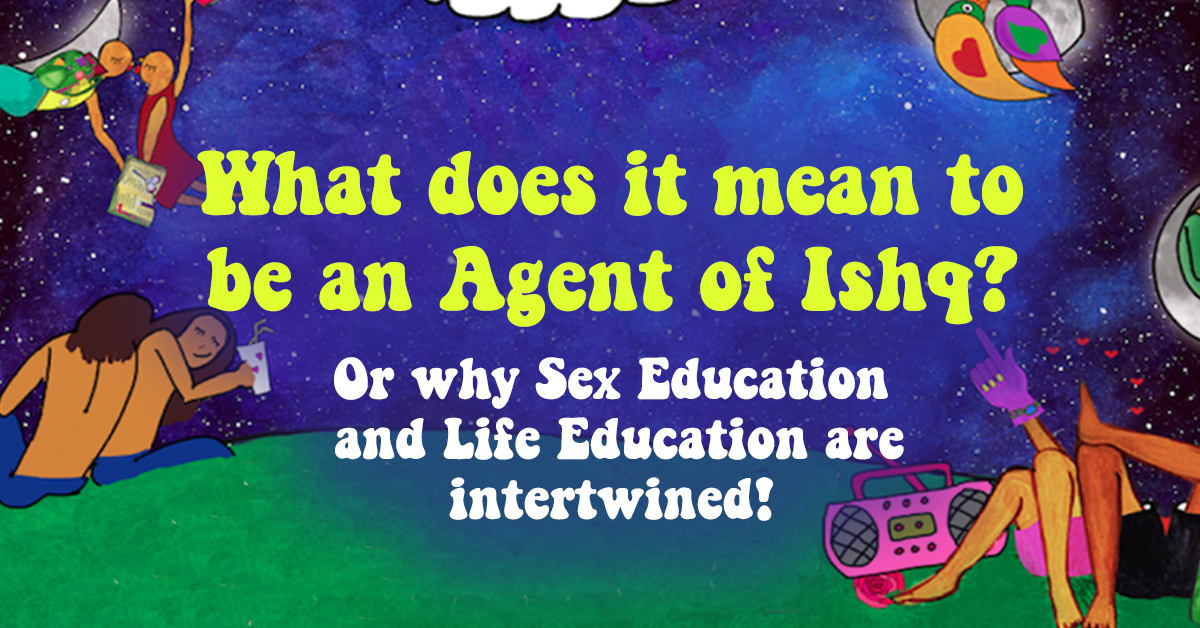 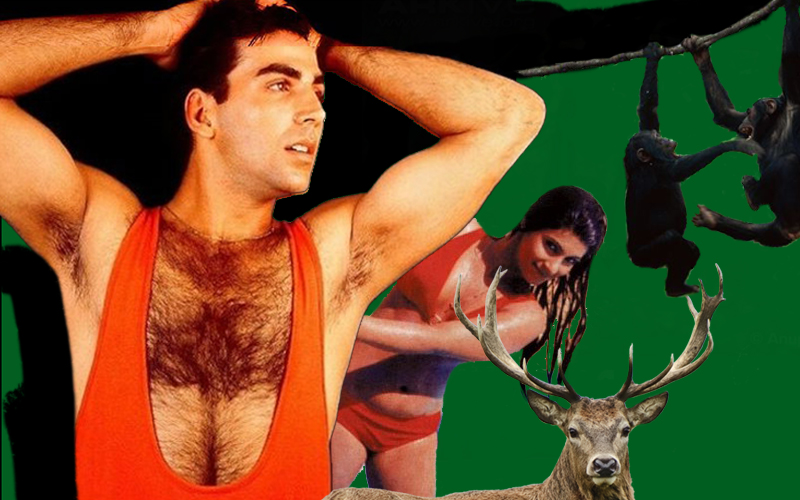 PUBIC AND PRIVATE: THE PROS AND CONS OF REMOVING BODY HAIR To remove or not to remove?  24, Nov 2017