Shit bisexuals have to hear.

This is the bisexuality unicorn! Since the time I have been out as bisexual, I’ve faced a fair share of biphobia. It is like being in a hailstorm – so that umbrella is a more than appropriate symbol! It used to make me mad.

But after years of the same old questions, I now find stuff biphobics say funny.Here is some shit bisexuals have to hear: PSST! WHICH ONE IS BETTER IN A RELATIONSHIP?Marks mil rahein hain kya? Or is there a prize? 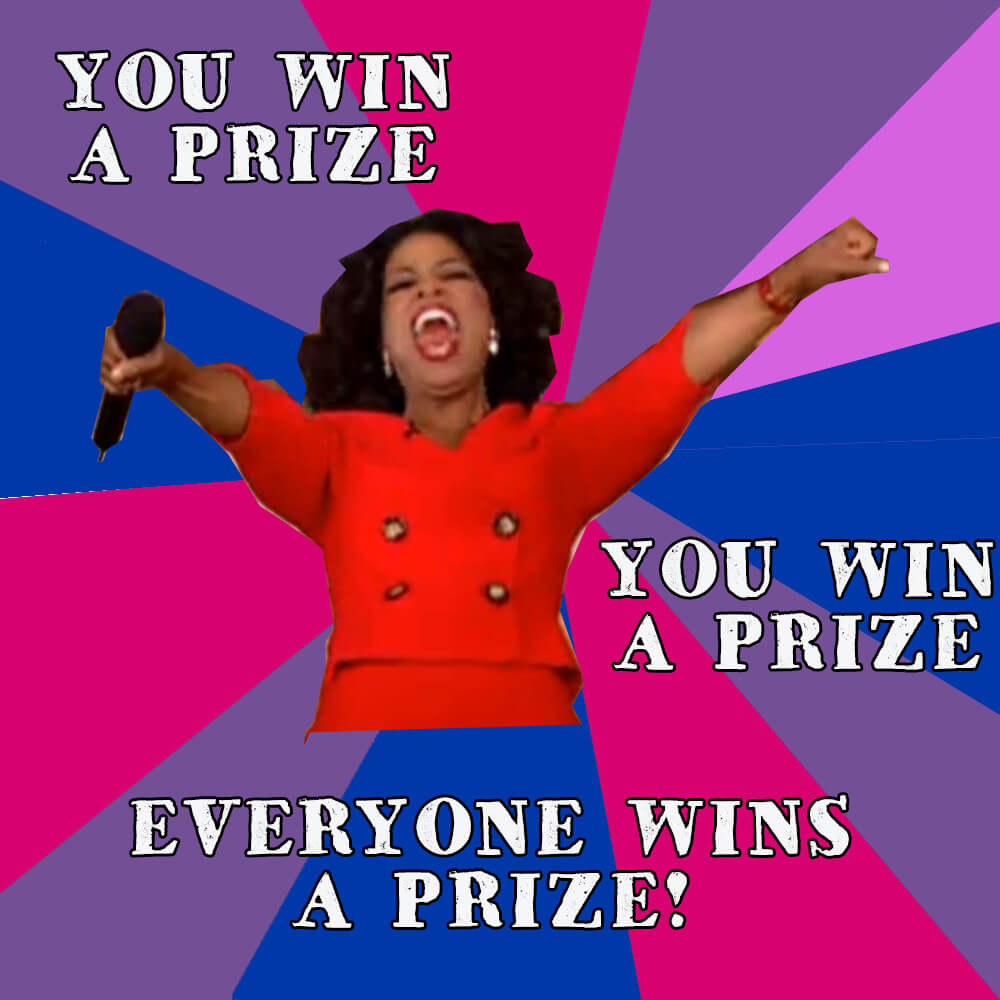 Guess what? Gender does not determine the quality of a relationship.  Like everyone else a bisexual person falls for the usual things – personality, wit, sparkling eyes, sulky mouth, crazy hair, compatibility, kindness, honesty. Those qualities among many others determine the nature of relationships, not the gender. SEX IS BETTER WITH WHICH ONE?See above answer please.Yeah, ok, you can’t resist asking. Sexual experience with men and women is different, sure. But there is no way to compare them, they're just different. And after that– it depends. On you, on your partner, on the kind of connection you share, on the mood you’re in. Yes, experience counts. Oh? You’re disappointed? This is just like everyone else? Ya, well, point made.

SO DOES THAT MEAN YOU HAVE A PENIS AND A VAGINA?Many a times with heterosexual audiences they feel that you have both penis and vagina. Frankly it would help if I had both. But this is not always the case. Most are of either sex with the genitals of that sex, some are intersex.Bisexuals aren’t all intersex but intersex persons may be bisexual.

IT'S A PHASE YAAR, EVEN I AM ATTRACTED SOMETIMESNope honey it is not a phase. It won’t be gone in a fortnight and back again the next. We aren’t werewolves. Bisexuality is a real sexuality. If you’re “attracted sometimes” or time after time then time to accept you may be bisexual. And like attraction for anyone you may or may not act on it. Feelings are real, yaar. 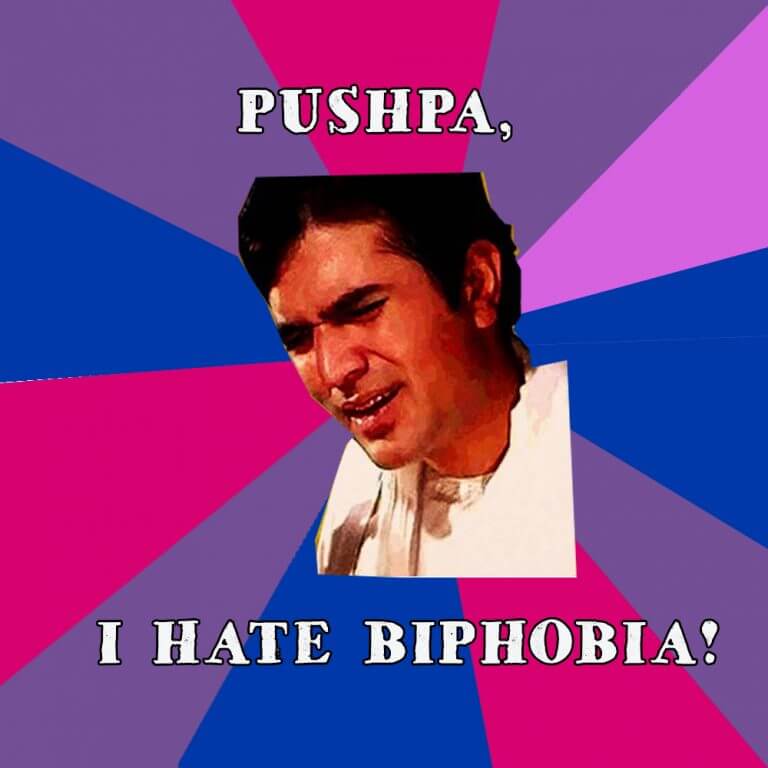 YOU ARE JUST CONFUSEDWell love is sweet confusion na? For you, for me, for Rahul and Simran, for Shahrukh and Saif.But otherwise, no bhai. Not confused.It is not like choosing between Gym or Yoga (besides you can do yoga in the gym, right?). You know it intrinsically when you are attracted to someone. And you can’t just push it away. But since there is so much societal denial around us many feel the pressure to engage in sex before saying it out confidently.

THIS IS JUST LUSTWah Wah! Taaliyan. This is a ball thrown in my court all the time. But guess what? Am not playing. While lusting is also healthy, feelings of love are equally valid. So just because they don’t match your experiences doesn’t mean you can denounce them.And by the way, lust is not just. It’s just lovely! 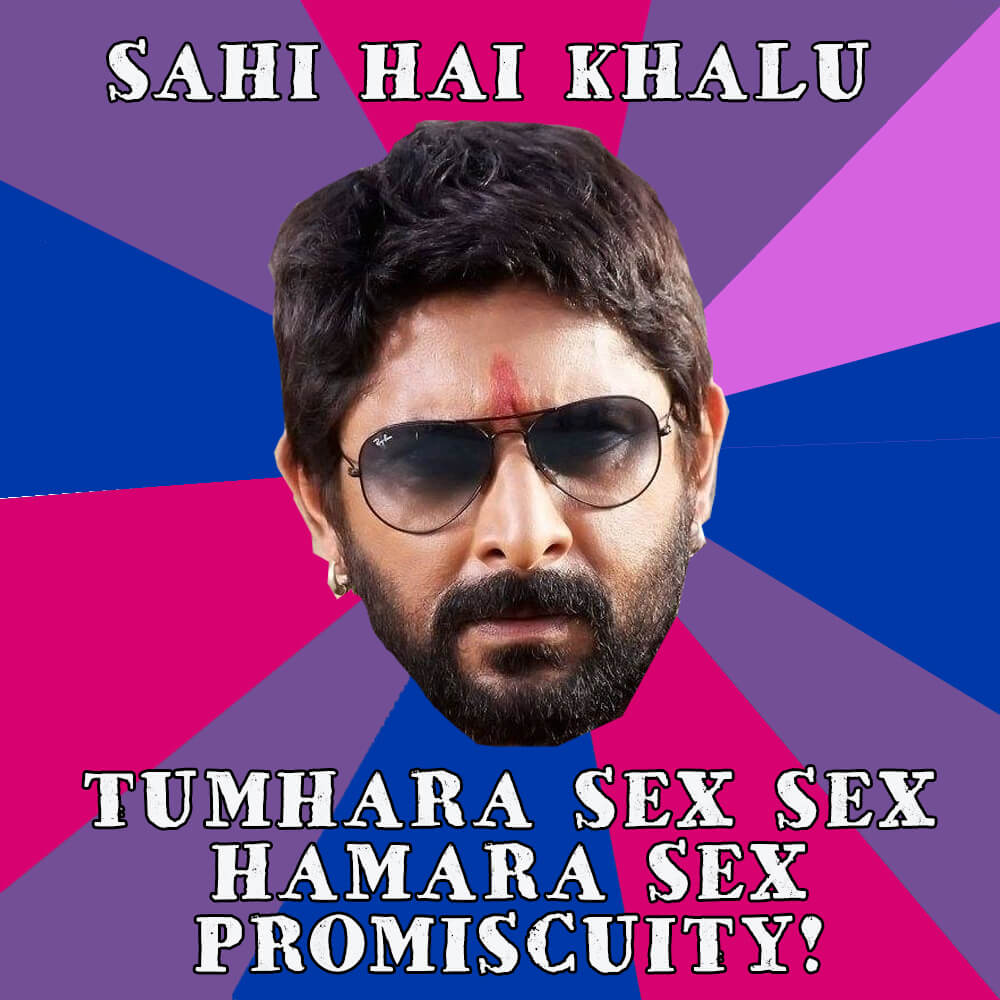 WILL WAIT TILL YOU COME OUT AS LESBIAN/GAY.Rukte reh jaoge just like Ache Din. This is not going to happen and does not sound like acceptance at all.

PROVE IT, KISS ME.See, if you want to kiss me, just say it. Don’t use excuse of proof and all.Sometimes I don’t know if they mean it or they are just taking a chance with me. Frankly no one needs to be proved anything, we aren’t sitting in court and only kissing isn’t permissible evidence. Believe it or BI BI. 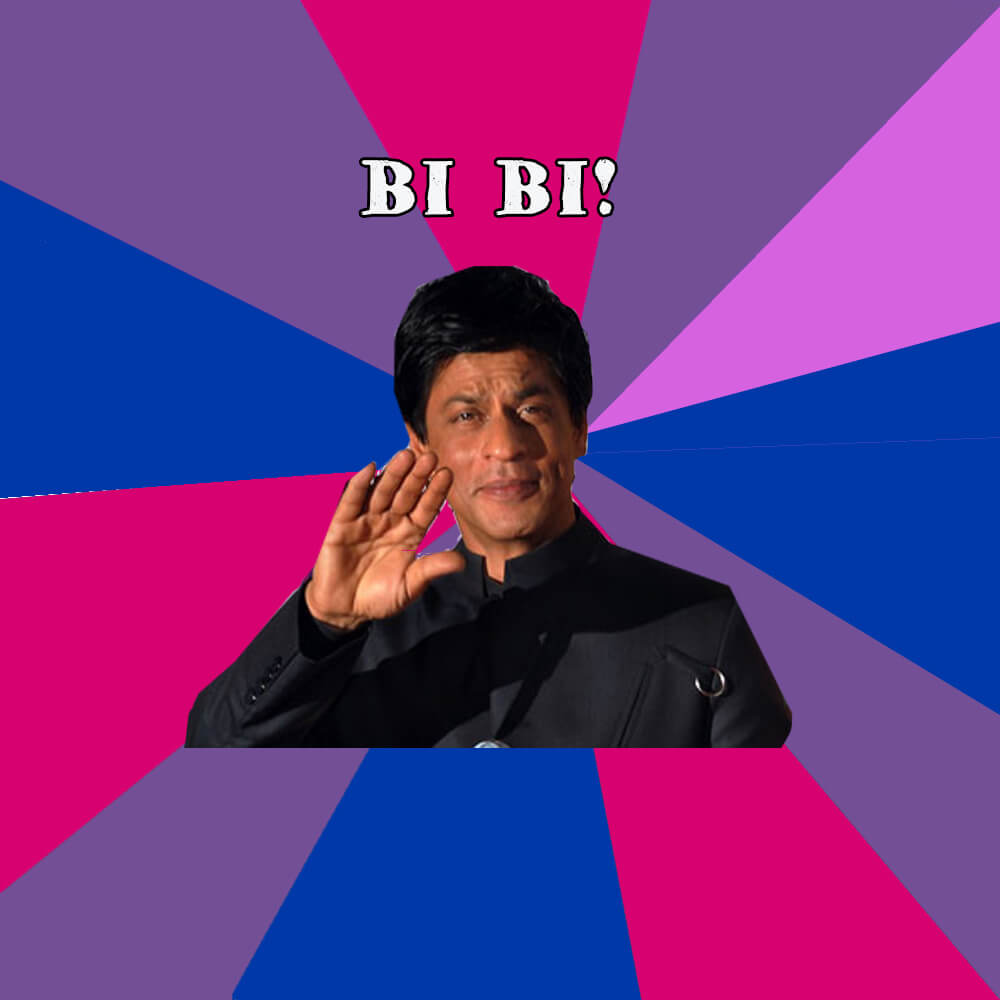 I don’t know what a bisexual is supposed to look like. Are we supposed to have bigger ears? Green skin? Look like the grandma wolf of Little Red Riding Hood? As much as the homosexual world would like to believe that bisexuals look ‘straight’ and straight world want us to look ‘lesbians’, the truth is we come in all shapes and sizes. All are sexy. THEN WHY HAVE YOU BEEN DATING ONLY MEN/ WOMEN LATELY?Acha sawaal. Apki badaulat. Finding people who are not biphobic is already very difficult and finding bisexuals of the opposite gender is like finding the treasure of the Egyptian mummies. Unless you step out of either communities you cannot interact with the other gender as easily. So dating isn’t easy. However, if you probe you will find that attractions still exist.

BUT YOU HAVE HAD SEX WITH ONLY ONE SETYou don’t need to have sex with someone to know you are attracted to them. I know I can never have sex with Deepika Padukone but khayali pulao smells good even if you can’t taste it. Sexual behaviour is one part of our personality not the whole of it. Sex is great but not the end all.

SO YOU ARE GOING TO GET MARRIED (TO SOMEONE OF THE OPPOSITE SEX) EVENTUALLY , NA? Gay and lesbian friends sometimes think bisexuality is an an excuse to get married and remaining closeted within the marriage.  That Bisexuality comes from a reluctance to embrace homosexuality openly. Others think, you're just doing some timepass and then you're going to choose safe, social institutions like heterosexual marriage.Many bisexuals don't marry. Some fall in love and if they want to get married that's their right, right?Too bad agar tumhari jal rahi hai.

YOU ARE JUST EXPERIMENTINGYes with acid and alkali. No this is not a science experiment I am going to get results out of. Everyone has to experience their sexuality. That’s not experimenting. It’s called life.

SO WILL YOU JOIN US IN A THREESOME?I’ll pass. I don’t do threesomes with bi-phobics.Seriously, this is the creepiest one I have heard. While I am all for all kinds of sex, you do not ask this to a friend when they are coming out. It reduces sexuality merely down to a sexual act and also trivialises their choices.

LIKE YOU I USE TO THINK I AM BISEXUAL, I HAVE LOVED ONLY ONE MAN/WOMAN, BUT NOW I AM GAY.Haw! I have news, you are still bisexual and you are not alone. Not all bisexuals find themselves attracted to both genders equally. Some might find more men attractive and some might find more women attractive. It is also not only about who you are having sex with. If you find yourself attracted to more than one gender even if it is just one person it is time to accept that you might be bisexual. Bisexuality is a spectrum and there is space for all. 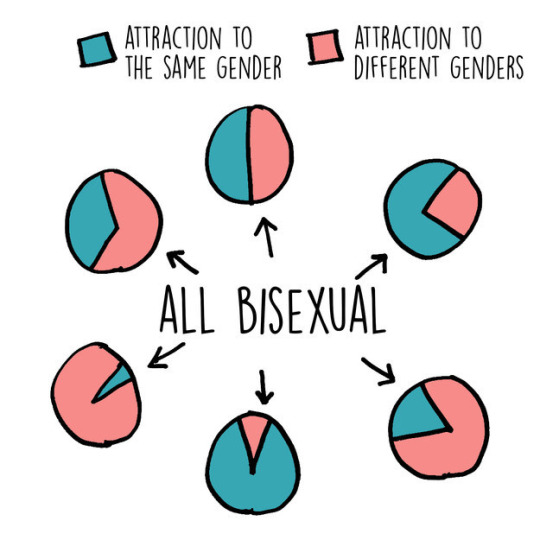 BISEXUALS ARE PROMISCUOUS AND NEED MORE THAN ONEI feel like the voracious vamp of a Bollywood film. Par kya kahein. Bisexual people are NOT just promiscuous people looking for a label to hide under. Promiscuity is not related to your sexual orientation. Just like some but not all heterosexual and homosexual people are promiscuous, some, but not all bisexuals are promiscuous. This kind of broad generalization is boring prejudicial. Bisexual people can be monogamous. They can also be polyamorous. Unlike most imagery representing bisexuals they do not need both at the same time (but might have two partners of different sexes). Many are in long term commitments with their partner/s; many are single. Some are celibate by choice or by shyness. (YOU ARE LUCKY) YOU CAN CHOOSESwayamvar nahi chalu hai. Unfortunately, you can’t choose who you fall in love with but you are alienated by either community when you choose either gender. Gay friends don’t want to include you in spaces when you start dating a girl and even if you are out your family wants you to have a heterosexual marriage. Support systems are few and mostly invisible.

SO YOU LIKE TO BAT FOR BOTH SIDESYes. And score on both. 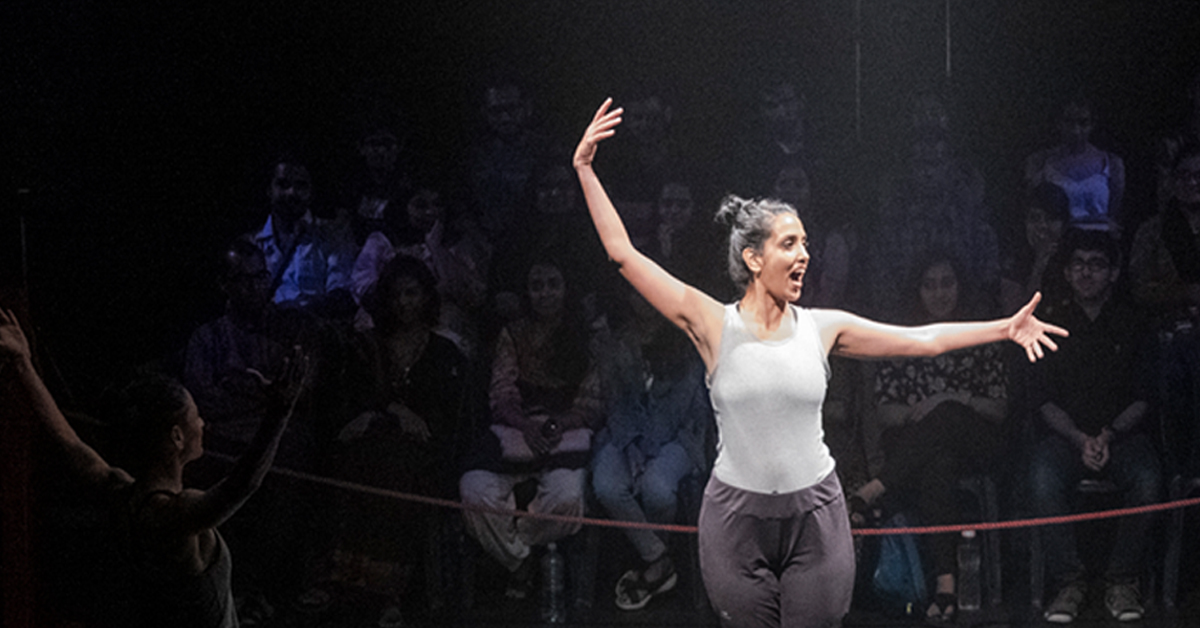 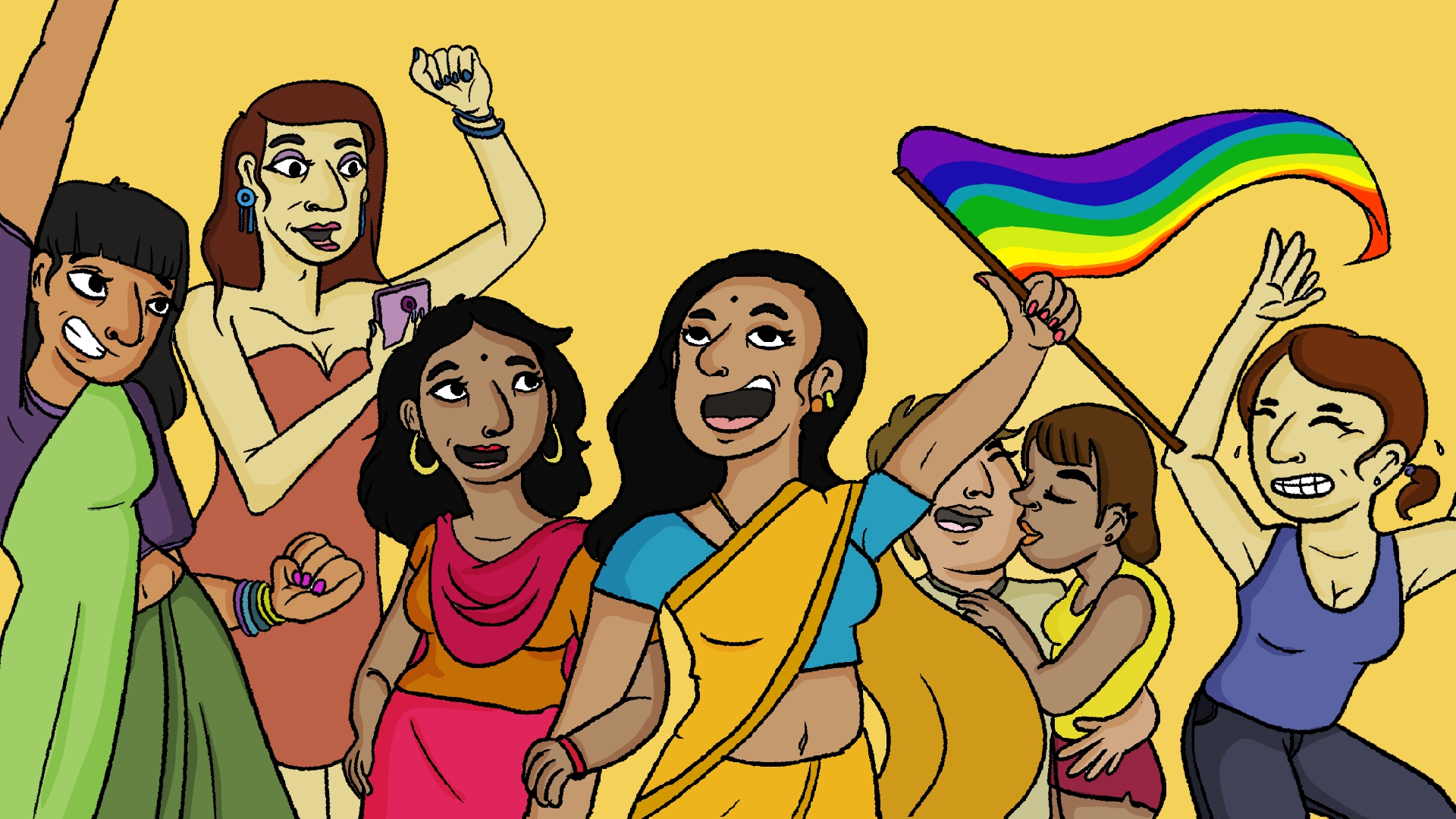