WHY I DECIDED TO PAINT SEXY PICTURES OF MALE MOVIE STARS

Esqueer began as a satirical take on “Esquire”, or really any men’s magazine.One winter I had been toying (doodling) with the idea of “seeing the world through rainbow-tinted glasses”. Just around then, I had also made what was to be the first Shakti Kapoor painting for my then boss. (“All I want is an oil painting of this** picture”, she said, “Above my bed.”). 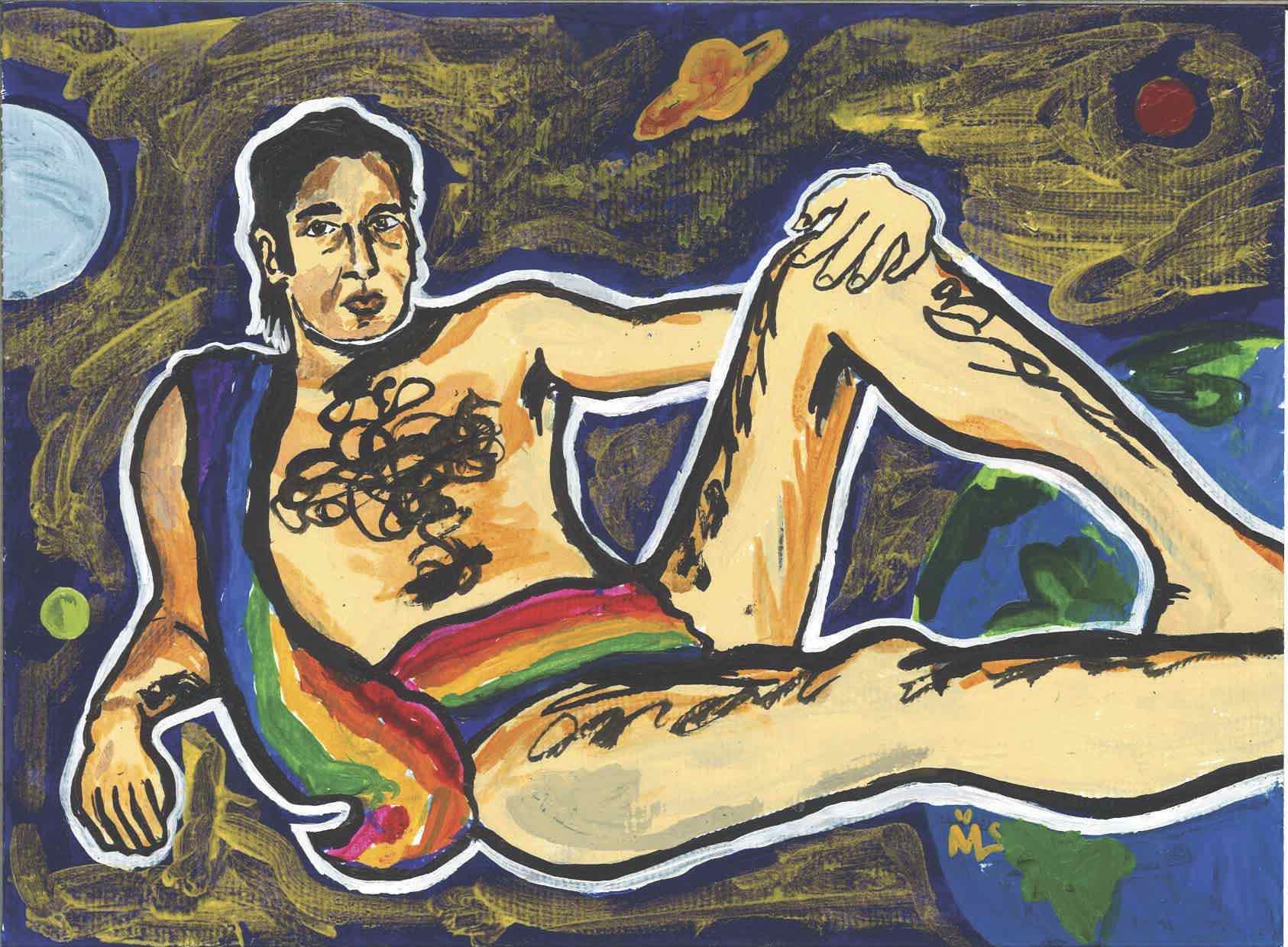 This first Shakti Kapoor painting had, in fact, brought on quite a powerful response from my colleagues who saw it the day I presented it to my boss – with reactions ranging from shock to surprise to giddy giggling. I realised there was something here – and that although people had mixed feelings about seeing Shakti Kapoor reimagined as a pin-up, what they did enjoy was the act of gazing upon him, being at liberty to look at him unabashedly as he unabashedly presented himself to be looked at.Something fell into place and I realised I was going to make a catalogue of the lot of them – for us to be able to look at men the way magazines like Esquire probably look at women, except not in the same way as objects next to objects - it sometimes puts them next to cars, or puts cars next to them. I decided instead to put unicorns and rainbows. Hence, Esqueer.I like to joke to some of my friends that the series is based on the idea of turning the Male Gaze back on the Men (though I wonder if it’s really possible to do that; it would be closer to say I am casting a Female Gaze on them (see Jill Soloway’s talk on the topic). Far from being a means to an end, it is the beginning of a conversation. What more is there to being a man when he is the subject of a gaze, of any gaze? Do we ever stop to question what we assume about him? There is almost a vulnerability in being exposed, in submission to a viewer, and I want to linger here for a second.And yes, what happens to me as a woman who is gazing at this man? Far from being an object, am I now the eye that deigns to give it any meaning? How interesting. I have always wanted to be an artist, but like loads of young people in India who love art, I decided to do something a bit more ‘practical’ and work as a graphic designer and culture researcher. I went to Kala Ghoda a lot during my college days and used to come away disenchanted. I searched but did not find a representation or voice that seemed to coincide with mine.Maybe it had something to do with the fact that the majority of art we see in the world today involves female muses as seen through the Male Gaze. Besides, the overwhelming majority of the artists I was exposed to while growing up have been men - this meant that the paintings I have exalted contained sexualised women subjects – which at least led to body image issues, if nothing else.Esqueer, for me, was a way to sardonically enter the world of art by teasing out well-known symbols in our surroundings (viz. Bollywood) and breathing new meaning into them. This series was my way of bringing a bit of diversity into the spectrum. I wanted to celebrate how, when these photos were clicked, each actor was in fact being themselves in their full capacity.Are the images really erotic? They can be anything you want them to be. To me, they’re just expressing themselves. There’s a “be yourself” theme that runs through the series, in my mind. Through the very fact of depicting them as subjects of paintings, I think I am attempting to venture into the sometimes stormy and sometimes still, deep waters of gender ambiguity. And it’s exciting, it’s liberating. 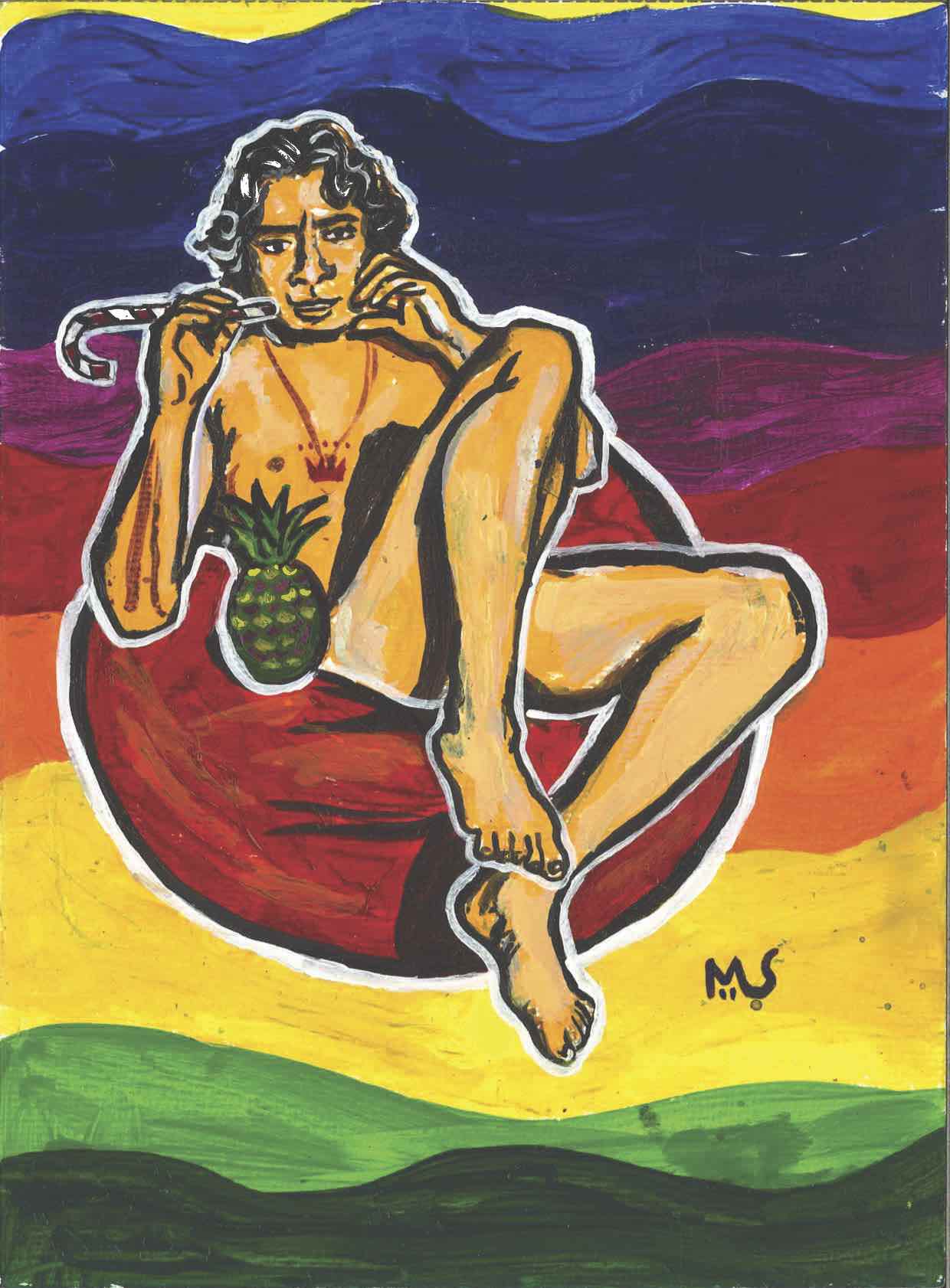 Because gender is such a nebulous and conflicted term especially these days, let us say I am working with one notion of gender – that of Bollywood’s masculine, monolithic male – and finding he’s not all that monolithic. He has different sides, we just don’t celebrate them. And actually people respond to a range of different masculinities, some of them queer, so inflected with gender ambiguity and fluidity.We’ve seen every kind of man in Bollywood, I think, and no questions have been asked. We have men crying, dancing, unabashed, loud, angry, cross-dressing, and so much more. In DDLJ, SRK can’t even speak English to a cop in Europe and swears at him in Hindi, getting into trouble. But clearly India thinks no less of him. 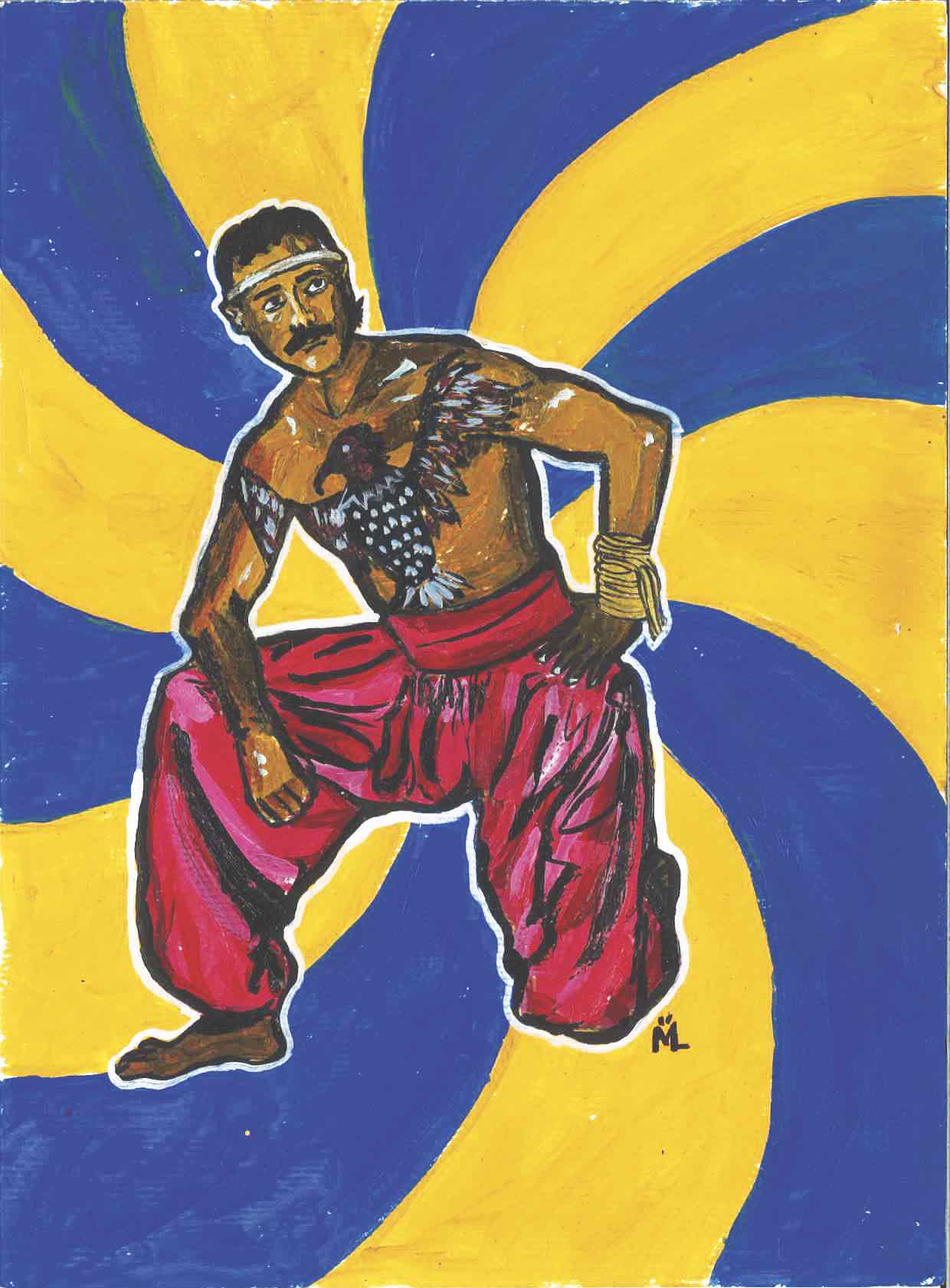 It is likely that Bollywood, nay, Indian culture, has always accommodated plurality in the first place. No one apart from the patriarch character is as monolithic as we sometimes think – and he, too, is usually the result of being beaten into shape by a preceding patriarch. My idea was then to just bring to light the plurality that already exists all around us, and instead of making it seem ‘normal’, highlight how very precious and unique it is. These young men are reclaiming their rights to less indoctrinated lives.A lot of people look at it and articulate that “Whoa…aaaaugh” kind of reaction. Some come close, they laugh and delight and gape. People do recognise these stars - Ranjit, Shakti, Sunny and Akshay – people have some relationship with these images or the films in their mind. When I add a new symbolic layer, it makes them think, I hope. 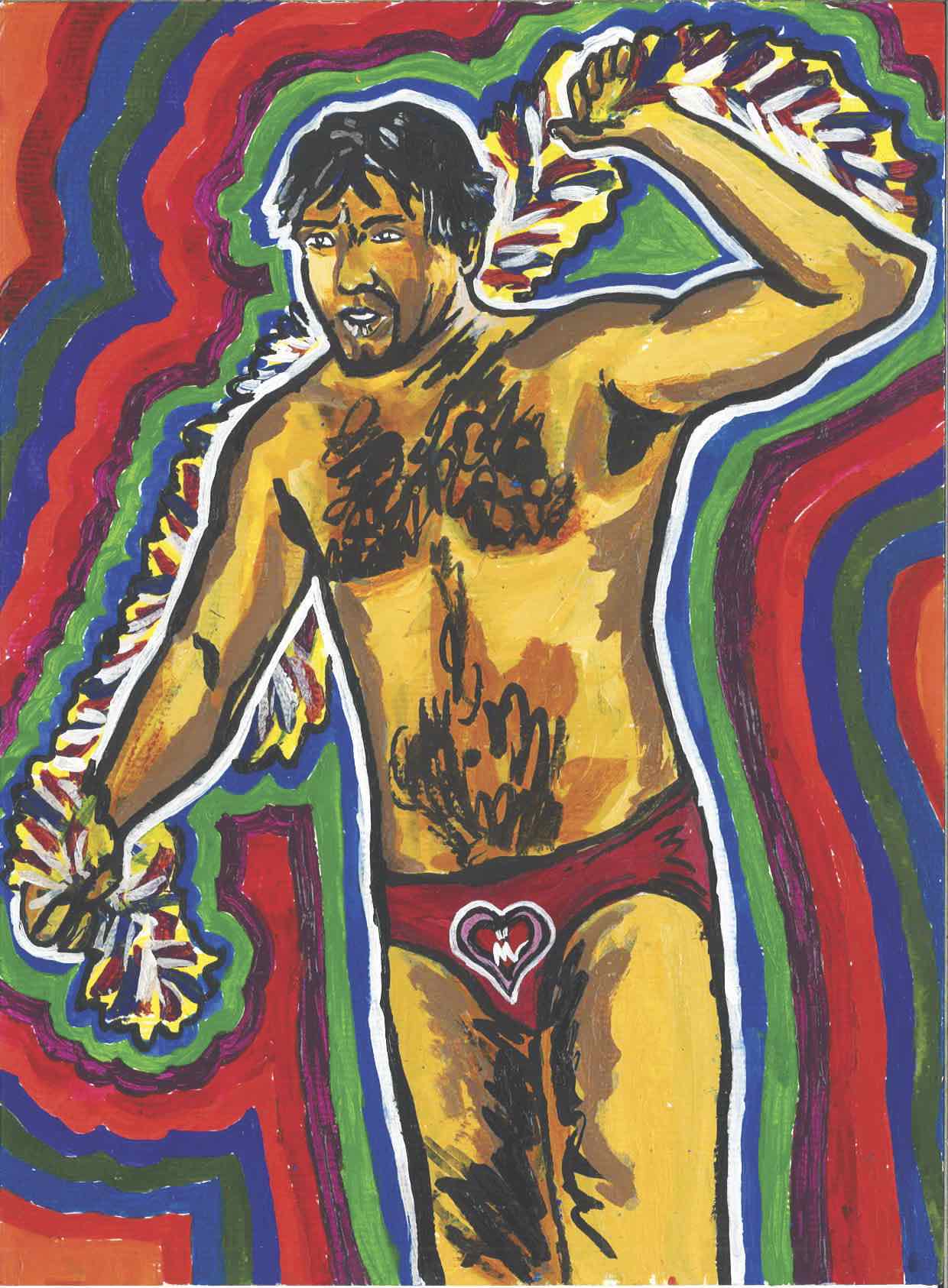 It was important for me to talk about queerness in an Indian context – not an alien one. I used to imagine what it must be like looking at all popular media and culture ‘through rainbow-tinted glasses.’ I used to make-believe that I had grown up with in a slightly more queer world. And the paintings kind of turn that make-believe into reality. I feel like if I can make people feel acknowledged – especially if they have grown up queer in India – especially the things all around me that I thought were always rather queer, then maybe people like me wouldn’t feel so lonely any more. Because somewhere beneath all of this while making them, I was repeating to myself: if these men had the guts to be themselves and get away with it, why should any of us be afraid? And indeed, as someone who came out as queer a couple of years ago, this has been incredibly important.After this project, I found myself observing men like I hadn’t in anatomy drawing classes in art school. The fact that these poses were not imagined by me meant I had to observe each subject carefully. It made me watch men more, not in terms to how they look, but how they must feel to be in their bodies, changing how I relate to them. It was greatly therapeutic for me because it took me outside of the toxic cycle of viewing a female subject in a painting or a photograph and somehow subconsciously using it to body-shame myself. Empathy replacing self-consciousness or body issues by thinking of others, not just myself – I find that incredibly valuable.I also hope that others who are used to not examining men at all might find a reason to, when they see paintings like these. Everyone should look at men. Not to demean them or objectify them, but to see them, because they exist and they’re there. Wouldn’t that be nice?Art exists to stir one’s imagination, to expand the mind’s eye. As an artist and visualiser, I have to take a leap, I have to try. Sexiness is what you want it to be. The most coveted thing of all should be a person who can feel joy and liberation in being themselves (but it may not be attractive to everyone and that is OK!) 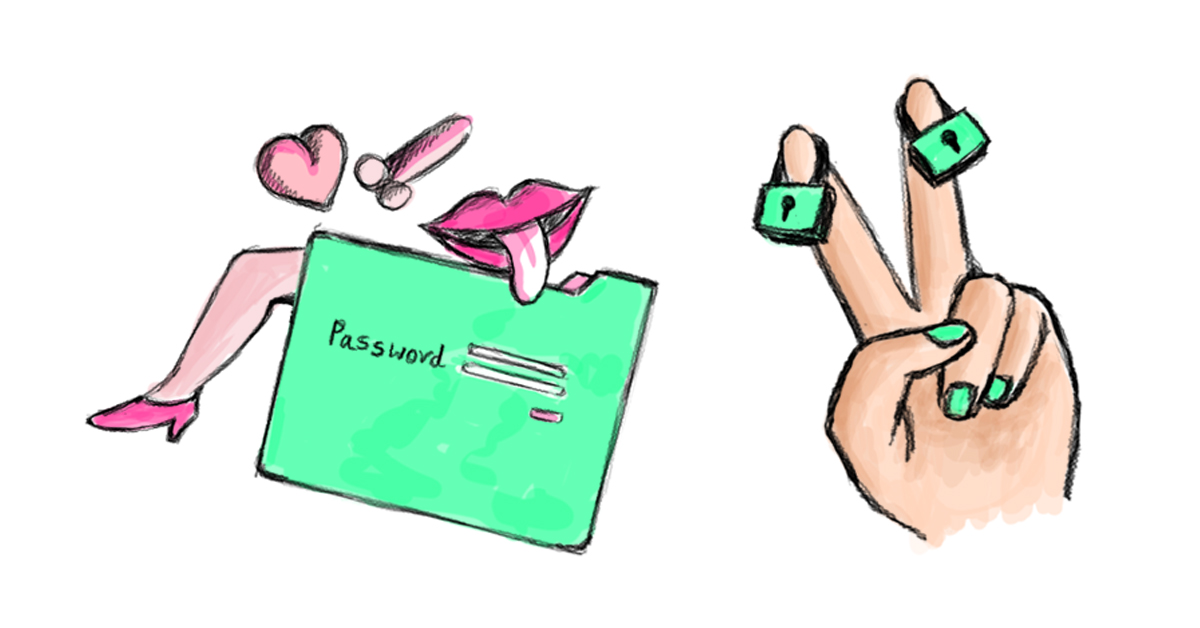 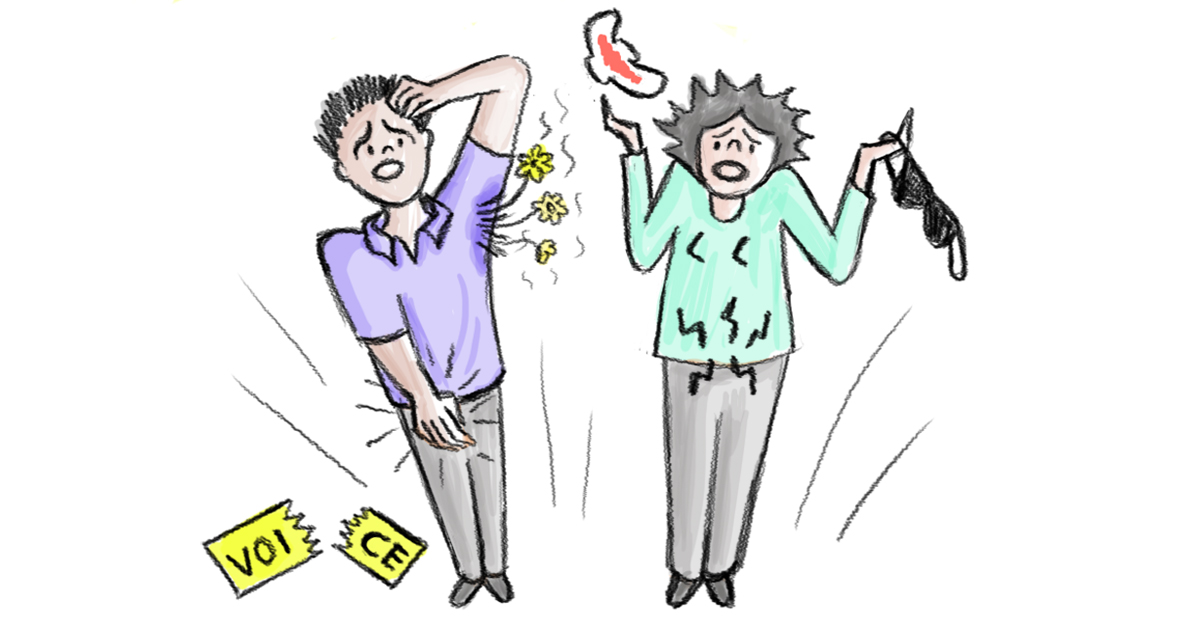