I think of this as meri bainganwali story - my eggplant story. Yes, like the emoji.My bainganwali story took place in Delhi, declared one of the unsafest cities in general, but for women in particular.After a long day at work, I decided to go meet a friend. All I wanted was to chill, zone out and forget about the day. I caught an auto-rikshaw, plugged in my earphones, and settled down for the ride. My auto driver had other ideas though, and asked me a question.Auto wala: Issme gaane bhi bajatey hain? (Does this play music?)Me: Haanji (absent-mindedly) Yes Auto wala: (not really pausing) tabhi log shaadi kar lete hain.Saath mil jata hai, pyaar banta hai. (This is why people get married – to have a companion on the road of life, to have love).Me: haanji! I sighed, resigning myself to resisting an unsolicited lecture from him on the importance of marriage etc. Still, for some reason, I decided to remove my earphones and hear him out. Perhaps, being a psychologist, it’s an instinct that comes naturally – to listen when you feel someone wants to talk.Me: Haanji! Par akela rehne mein bhi koi burai nahi hai! (Sure. But being single is not exactly bad either)Auto wala: Pyaar miltey rehna chahiye. Aapne kabhi dekha hai jawan ladkiyan, apne se bade mardon ke saath kyun rehti hai? Kyunki un me zaada stamina hota hai.Yeh jo chinki ladkiya hoti hai woh  hapshi mardon ke sath kyu jaati hain? Kyunki, unka bada hota hai .Tabhi toh unko chor hi nahi paatin.(One must keep receiving love. Have you seen how young women are drawn to older men? It’s because the men have more staying power. Or that chinky (a prejorative for North Eastern) girls prefer black (meaning African) men?)I realised then that when he said pyaar (love) he meant sex. Reflexively, I checked to see if the auto was not taking a different route from my usual one. He wasn’t.Auto wala: Auraton ko satisfy karna bahut mushkil hota hai. Aurat aag hai, aur marad paani. Mard ko aurat ko satisfy karna aana chahiye. (It’s very difficult to satisfy a woman. A woman is fire, man water. A man has to learn to satisfy a woman).The conversation felt inappropriate for obvious reasons. To avoid it, I quickly called-up my friend and started talking to him loudly to communicate to the driver that I was alert, not off my guard.  I got off the call as my destination neared, hoping that the auto wala had taken the hint and wouldn’t try to talk to me again. But that was not the case. He continued.Auto wala: Aap hi sochiye, agar main apni biwi ko kush nahi rakh paya toh woh mujhe kisi aur ke liye chorh degi, aur society mein meri kitni badnami hogi. Aapko pata hai meri biwi ko kush karna aasaan nahi hai. Kabhi kabhi toh raat bhar ungli karni padhti hai taki woh satisfy ho jaye. Ungliya dard ho jati hai par main inkaar nahi kar sakta. Kabhi kabhi toh jo lamba wala baingain (eggplant) hota hai ussey mujhe apni biwi ko satisfy karna padhta hai. Warna who mujhe chorh ke kisi aur ke pass chali jayegi.(I mean think about it – if I can’t keep my wife happy, she will obviously leave me for someone else and that I will be socially humiliated, right? Let me tell you, she’s not exactly easy to please. Sometimes I have to finger her all night till my fingers begin to ache, but I can’t deny her. Sometimes I use that long eggplant to satisfy her otherwise I feel she will leave me.) 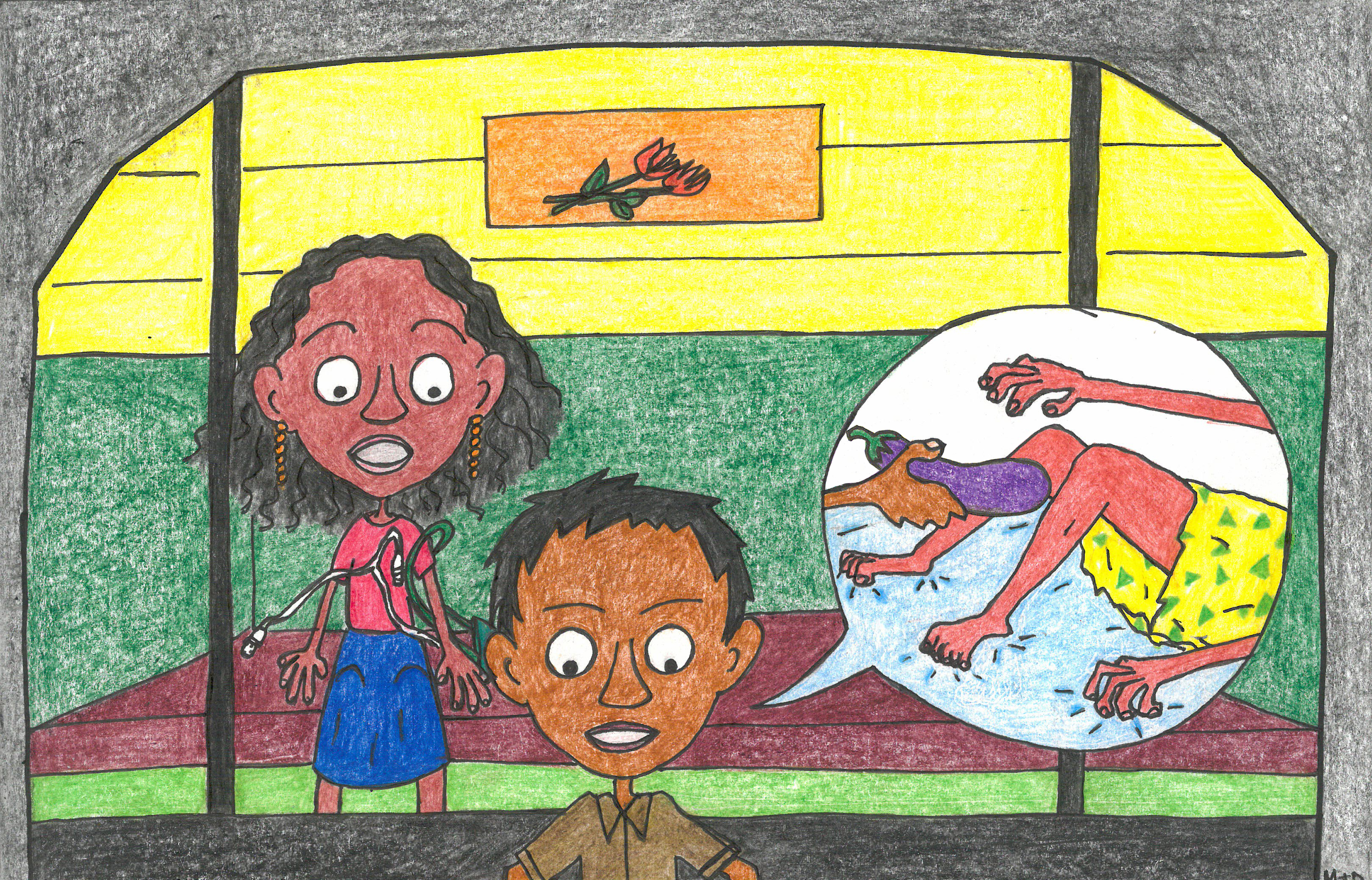 I was shocked at what I was hearing, but also a bit compelled, perhaps voyeuristically! Thankfully, by this time we had reached my friend’s place and I hopped out quickly I was honestly caught between this tussle as to my own capacity of listening- as women or a psychologist. It kept me moving in one direction (as a psychologist) and guarded and stressed in one (as a person).I told my friend about the story – and in fact I have narrated this story to many of my friends and it always caused amazement and consternation. In fact many even share this story further. Some think the driver was crazy. Some call me crazy. Many have asked me why I didn’t get off. Didn’t I feel scared and worried? Obviously, They felt concerned for my safety. So I ask myself again - how did I feel? I didn’t feel unsafe, scared or worried. As a matter of fact, I completely relied on my instincts and my instincts were not sounding off any alarm bells. I was alert, sharply aware of my surroundings, assuring myself of my safety. To be honest, I didn’t feel weird listening to his story. In fact I found it an honest confession of his inner most desire. Yes, women are easily scared – with some reason –and maybe someone else would have reported him or called him deranged. But would you say the same for a person if they discussed the same thoughts inside the four walls of a clinic, a hospital dorm or a therapist’s room? That’s why I didn’t find what he said  dirty or cheap but an honest conversation about “Sexual Desire”. Maybe I didn’t find what he said offensive because I myself am a Postgraduate in Psychology with an interest in desire, pleasure and madness. I have always placed Desire AS central to human existence and of great psychic valuation. This was clinical outside the clinic for me, desire outside just sex or body! So why should what is ok for me in one place become not ok in another, I wondered.But even outside my professional identity, another question comes up for me in this context.I have attended many talks and conferences on sexual pleasure. We talk about desire and pleasure in the safety of a classroom but never in public or open spaces. Almost as if the Public – as a space, as an idea of respectability and worth -  has the right to deny the agency of desire and private feelings. We are conditioned to believe that some things are cheap and dirty – and that cheap and dirty is a threat. But I think women also have good instincts to gauge that for themselves, based on the situation they are in. Threat does not lie automatically in a stranger talking to you about sex, especially if that stranger is of a different class and caste, sometimes lower than ours. Threat is also something we learn to sense – we must learn to sense if we want to move beyond demonizing sex and men – because that unease of threat could exist even in your own living room, no?For me, I go back to this story time and again to try and understand the meaning of desire. To question the difference between clinical and non-clinical.The agency of pleasure and desire in a clinical set up is such a paradox to me. In a clinical setup it is considered safe and valued, and criminal/mad in a non-clinical set up. Personally i don't have a conclusion to this story as i often visit this story to understand different layers in which both our behaviors manifested. Instincts- the ring-a-ding-a bell in the pit of your stomach is saying something to you. Is it possible for us to learn to understand what the voice is telling you? I wasn’t carefree during that incident, but I wasn’t off-guard. I was very much in my place, just not cluttered by conventional notions of what is thought of as cheap and dirty and so, a violation. 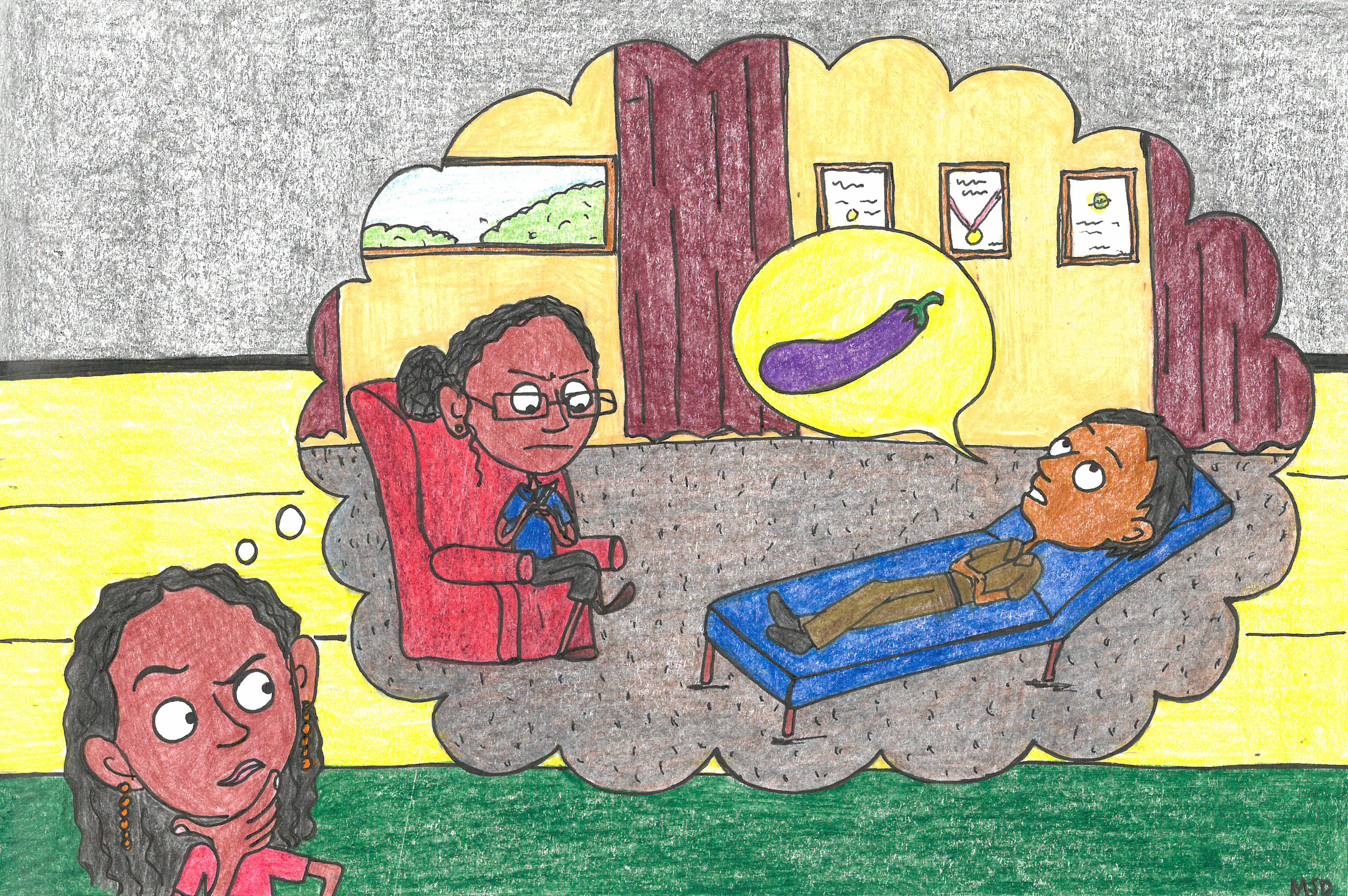 So the question arises: can we see other people’s desires without a cluttered view in which our own desires are already suspect to us?Because I allowed myself to be still without judgement through this experience, I feel my own views on sex-talk changed or shall I say a movement or break happened for me from what is respectable and what is not.  Here was a man’s own preoccupation with satisfying his wife – can this be a valid topic of conversation in a non-workplace atmosphere? I have afterwards asked many of male friends about it. It seem to matter to men to be assured that their partners are sexually satisfied. They like it when their partners express pleasure in being sexually comfortable and satisfied. Expression is liberation! Yes, it should not be against someone’s consent. But for me, it was worth thinking for a moment, about my own reactions, not only the auto-driver’s actions. I know it is not for everyone – but this was my baingan wali story, and my baingan wali journey.Henna Vaid, lives in Delhi and makes a living by working in Mental health projects for NGOs.
Score: 0/
pleasure AOI personal stories sex sex talk sexual self sexuality
Follow us: Skin Hunger: The AOI Guide to Mental Health and Touch A fun explainer, in comics form, about why touch is so impor…  03, Oct 2019
Agents of Ishq, a Community that Encourages Open and Positive Conversations about Love and Sex – By Roshni Jacob, Little Black Book (LBB) Bangalore Women go to Gynaecologists, whom do Men go to? Women have gynaecologists to go to for sexual health. What d… 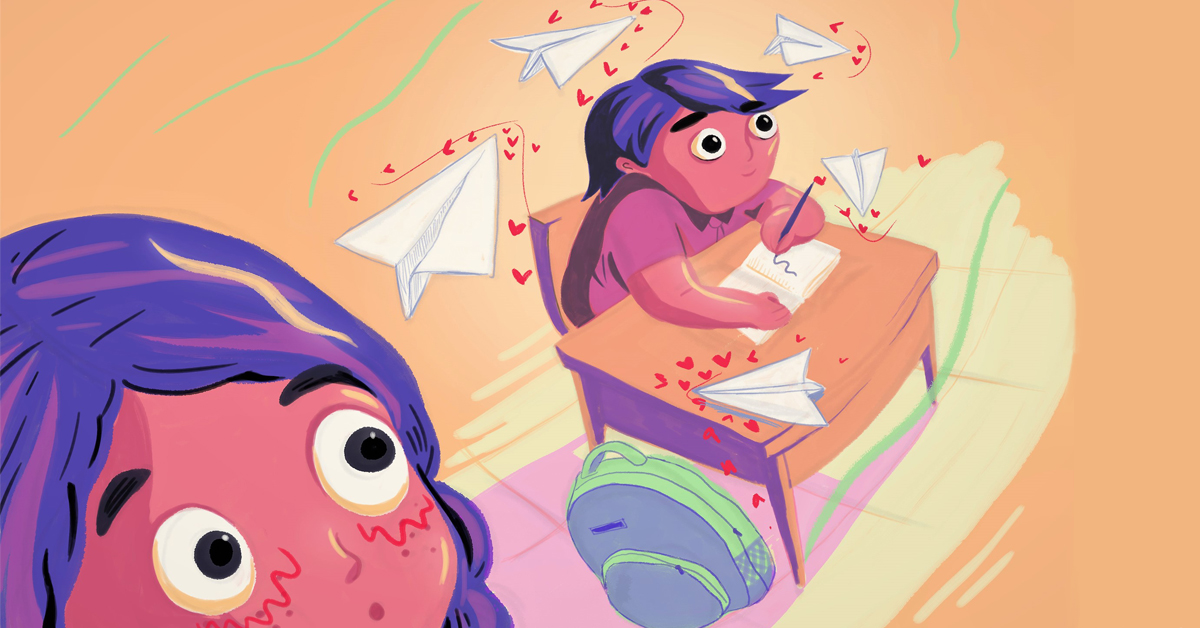 My First Schoolgirl Crush There’s a magical quality to falling in love for the first…  27, Aug 2020