NOT A HAIR IN PLACE: SEX, WAXING AND THE BODY IN MY MIND

Text and Images by Faint Perhapses

Two things happened when I took up badminton at 13: My first real interaction with boys and the regular wearing of shorts.This meant that something had to be done about the furry, grey film that seemed far denser and darker on my legs than on other girls’. And arms, of course! I pointed out to my mother (thankfully the only parent dealing with this department) an article in a women’s magazine from her own subscription, which encouraged adolescent girls to wax so by the time they’re in the twenties they’d have just the legs to flaunt below their skirts. Though my mother had caught me in the past shaving my knees with a men’s razor, she didn’t really see that my hairiness had been making me cringe at my body. In fact, she, along with a few of my other female relatives, frequently and openly, declared that I was indeed a hairy kid, giving my fears the loudest voice. However, my mother was into clothes, and she saw the point of the article clearer than my self-esteem issues. And so, I had been allowed to wax my arms, underarms and legs from an early age. It wasn’t half as painful as hearing casual remarks about the presence of ‘’excessive’’ hair on my petite body.When I turned 16, my cousin, newly of adult age, suggested we should get our belly buttons pierced to commemorate our getting to live in a city away from our respective hometowns. Of course, I scoffed it away. Not so much because it meant agreeing to a hole made through a fat chunk of stomach skin but because it meant revealing a hairy stomach to a stranger. She had her way of making partners in crime and soon we met up on a college-bunked Saturday to carry out this lark. Before we proceeded to business I asked her very consciously if she had done any “cleaning”. She had been a child almost hairy as I and at 10 years of age declared she wouldn’t in all her life go through the torture of waxing and would instead tie ponytails along her arms. She said that she had used a razor. And I had Veeted it, in keeping with the times.If you’ve ever mowed the lawns you’ll have noticed that the newly achieved neatness immediately makes any nearby overgrowth look distasteful. You discover weeds you didn’t know existed. What I mean is, something like that happened when belly button piercings were followed by requests to see said pierced belly button - not to mention the advent of backless tops. Once I’d removed the hair on my stomach, I grew into the practice of uprooting the “weeds” I felt were all over my body too. Every month I spent hundreds of rupees getting my stomach and back waxed along with my legs and arms, baffling some of the other clients at the beauty parlors with my ‘guts’ (my unflinching reception of wax strips) rather than my self-consciousness.It would have been a very different story, if even one of them had told me to let go of the fuss over my body hair. What they did tell me, was that I had beautiful eyebrows and I shouldn’t get them threaded- some parts were right to have hair. So why only some parts then? How did eyebrows get to be understood as authentic,, a natural presence of hair, while the rest of my body seemed like the real sexy me only WITHOUT the naturally present hair?It became obvious slowly but surely, that by the time I’d start having sex, I would let no pubic hair stay. The baap-weeds had to go. I couldn’t let my man, whoever it was and no matter how hairy he himself was, have a lesser woman. He’d obviously shave off his pubic hair or choose not to (I had no idea about hairy balls then), and it would feel perfectly smooth against my own angelic V-region. And he’d obviously expect it for how else would he go down on me? I continued waxing most of my body every month. My roommates barely ever noticed the overnight confidence with which I changed my clothes before them. It was really just me who lived everyday spending time microscopically examining the slow and sure hair re-growth. My beautician took notice though; she encouraged my regularity at it and promised I’d see a big decline in the growth rate “after marriage”. So far, I alone saw what lay between my parted legs. Only I knew I had buttocks with, not only a sheath of stretch marks scrawled all over, but also a soft layer of brown hair that caused no such itching as that which I felt over my waxed ‘parts.’ I was alone in knowing that my underarms smelt no different with no hair on them. I felt like my body was more authentic on some days while not so on others, and knew it was a matter of the mind over the body itself.

But, despite this realization, I continued designing my life’s events around the re-growth cycles, albeit with reduced fervor. The first time I ever made out with anybody, I’d been expecting it. I had ample time to present a version of myself that would be most delectable and super un-turn-down-able. My pubic hair stayed though- I was slowly beginning to see and feel how discriminating this hair removal business was. So desperate was I to be accepted the way I was not that I didn’t even consider what it would be like to be received for how I am. Because naturally, certainly, that would be just so, so unsexy.So you see, the focus shifted once again from me to them, the boys. There weren’t very many doing the impressing, so I tended to be the one do it.It took me a second sex partner to come to a startling but relieving inference.We met at a party where we got drunk (wasted) and had oral sex in a harshly lit room that shone unfettered luminance at my “underprepared” body. But here was a boy undressing himself to reveal a naturally hairless body. So I kept my eyes shut the way a cat does sipping the milk- if I can’t see the world, the world can’t see me. He went on about kissing me all over with great drunken enthusiasm. He didn’t seem to care about seeing the supposedly sexy - like a belly button jewel - resting amid something supposedly excessive - as strands of thin, black hair. When I pulled at his underwear in an attempt to take it off, he budged a little and said that he hadn’t shaved. No shit.I told him he shouldn’t be uncomfortable about such things (I hadn’t shaved either, dummy) and felt like a person of superior sensibilities. Somebody else deriving all the joy from my body made me enjoy my body even more, no matter the state its skin was in. Never had I understood intimacy like this before. So was it sex for which I had wanted all the hairless attractiveness? If sex is the game for which you want to have some goddess’ body, I thought, maybe I’ve misunderstood the rules. Or was it the alcohol that made my hair invisible to him? I wanted to put this to test.After this encounter, I booty called him several times. The first answer happened after quite a gap, but yet again, before we had sex we had a little bit to drink. MyY arms and underarms were waxed but my legs were prickly; I had given shaving my stomach a thought before scolding myself for being so quick to forget new insights. Besides, it’s a test of the theory, remember, fickle mind? The sex, this time in daylight display of bodies, wasn’t very different- he didn’t seem to care about the hair growth around my back and stomach, and went down on me while my bush was in its full glory. It felt like he was doing it so he could show how hot he could be at it. Or that it was something he could do FOR ME, and in that I felt sexy albeit hurried. But again, we weren’t fully sober.So I took this on a step further (Or I simply just wanted this boy again). 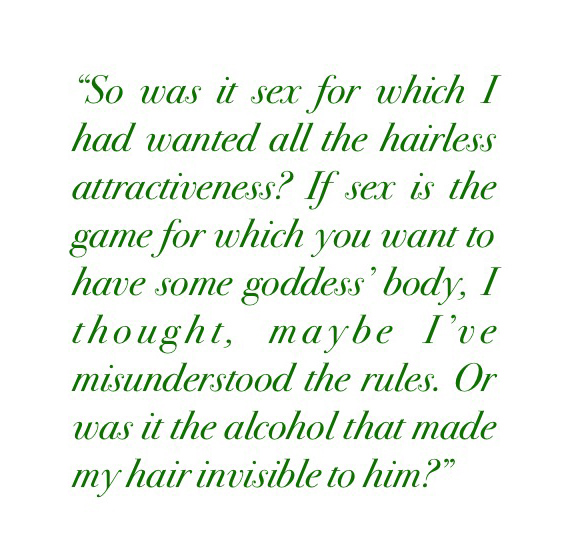 Except for my pubic region, I had waxed it all. I booty called him again, making sure it was a sober act this time. I felt wet a lot faster than usual; lose a layer of hair, gain a layer of sensitivity. His touches felt a layer deeper to the point of causing muscle spasms at a couple of places. Him? Well, he was a lot more comfortable doing me. I wondered if that could’ve been because of my waxed skin but then I also remembered] it was also our third time together. He responded similarly to my moves as he earlier had. And most significantly, went down on me with just the same fervor. Add to that, he even agreed that sober sex was a lot better. If waxed skin sex was any better, it most definitely was more so on my end, I felt.And yet, somewhere down our future run-ins together, I forgot all about the test. The recurring-vanishing cycle of the body-hair terrain went right through him without any difference, without any passing remarks even. Then I remembered a time when I first got to know in my early adulthood years that men took notice of these things when a few men sniggered at a female friend’s unwaxed arm. My booty-call boy though had been at quite a variance with this. I thought him very precious for this.But it’s probably not him; it’s instead sex that has made a definite difference. It is sex where all body-hair thorns dissolved into having no points, so to speak. In sex that my body has learned to be like itself, to like itself, to be liked, to be more than a passive object of supposed perfection.

Maybe having sex with other people might make him seem not all that precious? Now I let my body hair take its own course, but also wax it, if not as diligently. I wax often though, when I want feel the breeze against my skin. I can’t tell if sex engenders a decline in hair growth (as claimed by the beautician woman), but for me it has certainly led to a decline in my obsession with that hair growth, even if it’s a battleground that remains active!Faint Perhapses is in the first year of a Masters degree and in the second year of being sexually active. She’s now wondering how any of this is important to her bio. She writes self-confrontational erotic-ish essays here.
Score: 0/
BODY HAIR BODY IMAGE BRAZILIAN WAX CASUAL SEX SEXUAL SELF WAXING PERSONAL STORIES AOI PERSONAL STORIES
Follow us: 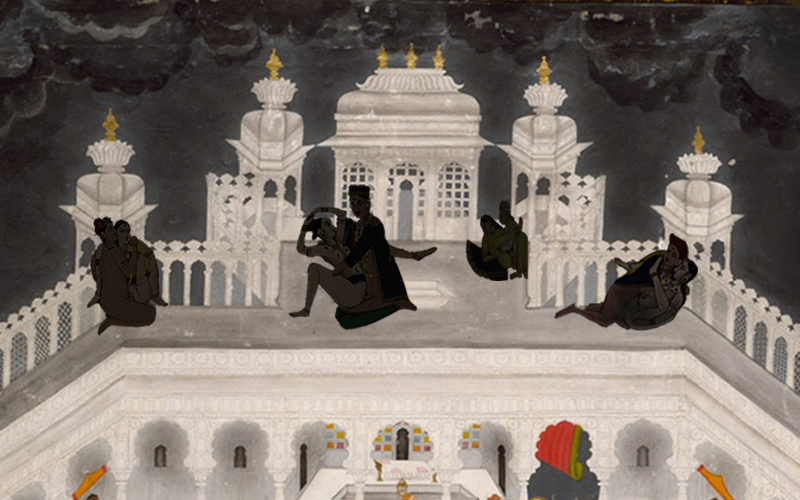 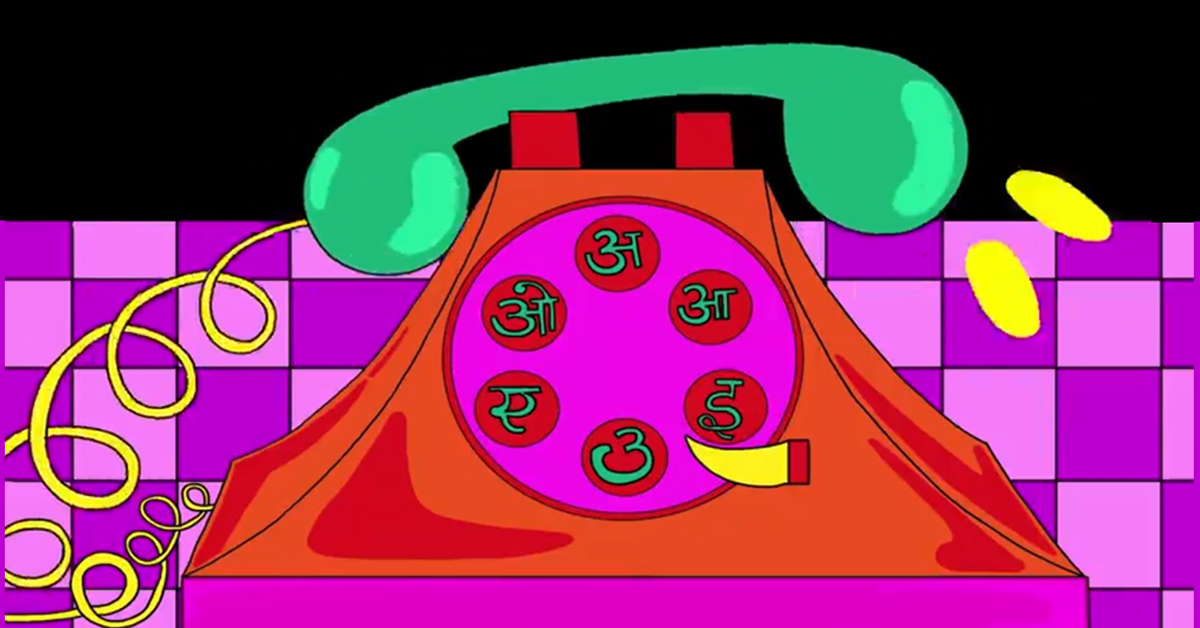 Orgasm ki Barakhadi: Because Pleasure is an Education Learn the ABCDs of an Orgasm, desi style!  10, May 2021