If You're Unsure What POSH, LoSHA, ICC & Other Terms Are, This Is For You.

Some common terms being used in the #MeToo conversation, explained.

As more and more women have been coming forward with stories of harassment and assault, have you been feeling unsure what some of the terms frequently being mentioned, actually mean, but also felt hesitant to ask? Here’s a basic list of some of those terms you’ve been reading and what they are referring to.What is sexual harassment?In India, sexual harassment in the workplace includes one or more of the following:-       physical contact and advances-       a demand or request for sexual favours-       making sexually coloured remarks-       showing pornography-       any other unwelcome physical, verbal or non-verbal conduct of a sexual natureIt can be addressed through the legal system, by approaching the police, or through non-legal methods, by lodging a complaint with the committee set up at workplaces or institutions or district administrations to deal specifically with sexual harassment. What is considered a workplace?A workplace can be a private or public institution, it can be a home, a small or big office, and it can apply to workers in the unorganised sector. It also applies to any place that an employee is required to visit in the course of their work, including transport provided by the employer. 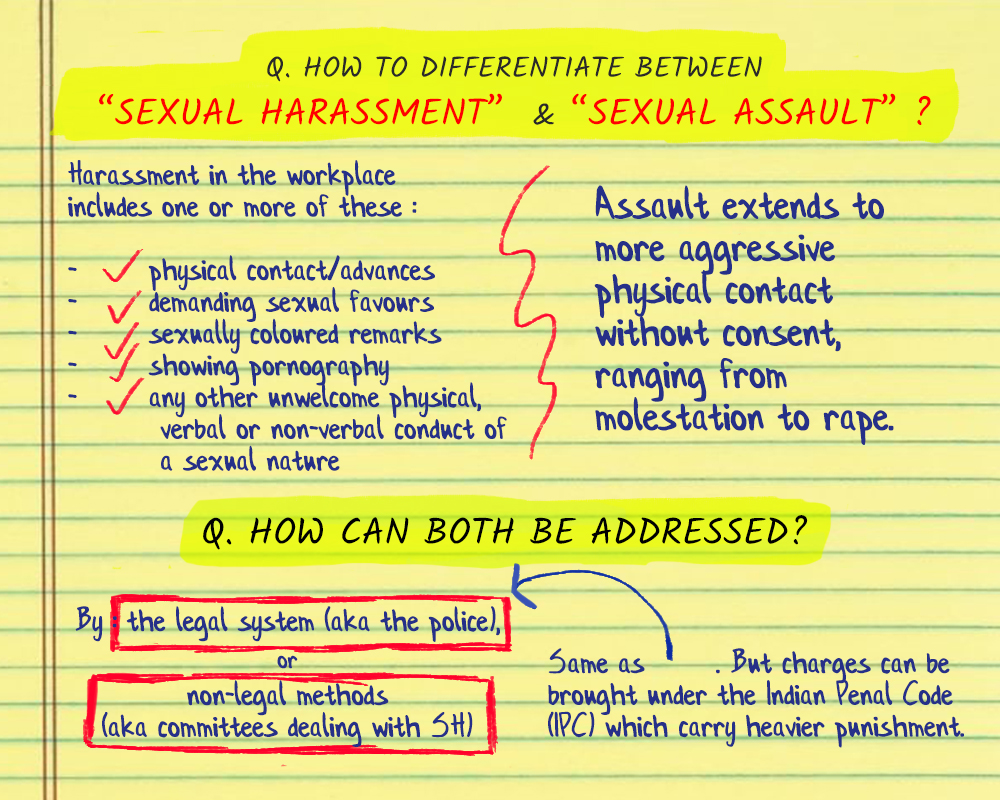 What is sexual assault?The term sexual assault usually extends to more aggressive physical contact without consent, ranging from molestation to rape. While a committee set up to deal with sexual harassment can be approached with such an allegation, the police can be approached too – charges can be brought against the perpetrator under the Indian Penal Code (IPC) which carry a heavier punishment than charges of sexual assault.  What is #MeToo?The “Me Too” movement was started over a decade ago by American activist Tarana Burke, to support young women of colour who were survivors of sexual violence. In 2017, when several allegations of sexual assault were made against the influential American film producer Harvey Weinstein, women began using the phrase in a hashtag that went viral on social media. Perhaps it grew popular because it offered solidarity, showing victims that they weren’t alone, while also encouraging women to come forward to seek justice or even simply to have their stories heard. Many say that the serious investigations and responses to sexual harassment that followed these accusations helped women feel their stories would be taken seriously now, in a way they usually never are.#MeToo has grown to be an important movement, not just in Hollywood but  across the world – exposing how powerful men use their position to exploit  women, and on just how large a scale sexual harassment and assault exists in our society. #MeToo has given rise to several necessary conversations on subjects ranging from good workplace conduct to what a “bad date” is. What is LoSHA?Close on the heels of #MeToo in the US came the Indian ‘List of Sexual Harassers in Academia’, or simply, The List. It was created by lawyer Raya Sarkar in 2017. Women could add information about their harassers to this list, thereby informally warning other women to be careful around these men.Some people opposed having such a list, complaining that it violated “due process” (more on that below) – they were uncomfortable that accusations could be made anonymously by women without requiring proof. Others were glad such a list existed, giving women the opportunity to speak up about their harassers while shielding themselves from direct backlash. Although The List became controversial, it sparked conversations about how we currently respond to allegations of harassment or assault in India, and how we should be responding to them. What are the Vishakha guidelines?These were a set of procedural guidelines laid out in 1997 to deal with sexual harassment, and have now been superseded by a new Act. The Vishakha guidelines came about after case involving a government worker and in Rajasthan named Bhanwari Devi. Members of a dominant caste in her village raped her in retaliation for her work trying to prevent child marriage in the area. She was treated poorly by doctors, police, and the judicial system, and the Rajasthan High Court allowed her rapists to go free. Women’s groups then collaborated to file a petition in court based on the fact that she was assaulted in the course of her work. Bhanwari Devi’s struggles resulted in the drafting of the Vishakha guidelines, which aimed to create a safer work environment for women. What is POSH?The Prevention of Sexual Harassment Act, or more accurately, the Sexual Harassment of Women at the Workplace (Prevention, Prohibition and Redressal) Act came into force in 2013 and replaced the earlier Vishakha guidelines on sexual harassment.Building on the Vishakha guidelines, they expand the definition of a workplace (covering the unorganised sector as well), who an employee is (part-time workers, interns, domestic workers are now all covered), and what a company’s responsibilities are to its employees. POSH also lays down the rules for setting up an internal mechanism to inquire into allegations of assault, with concrete deadlines and courses of action to deal with these cases swiftly and sensitively...at least in theory.  Should a woman choose to file a complaint under the IPC or any other law, the employer is expected to provide assistance. Every offence under POSH is non-cognisable, which means that a police officer cannot make an arrest without a warrant, and an investigation cannot be conducted without a court order. What is ICC?Under POSH, if a woman is harassed, she may choose to make her complaint to a company’s (or institution’s) Internal Complaints Committee – the ICC – which must inquire into the case. The ICC has to be headed by a Presiding Officer, who has to be a woman employed at a senior level in the company. If the company or institution doesn’t have a senior woman in any of its branches who can be brought in to head the committee, it has to appoint a woman from outside the organisation to this post. The committee has to have at least two members who are committed to women’s causes, have experience in social work, or have legal knowledge, and one member who is from an NGO that works on women’s causes or is familiar with issues relating to sexual harassment. At least half of all the ICC’s members should be women. 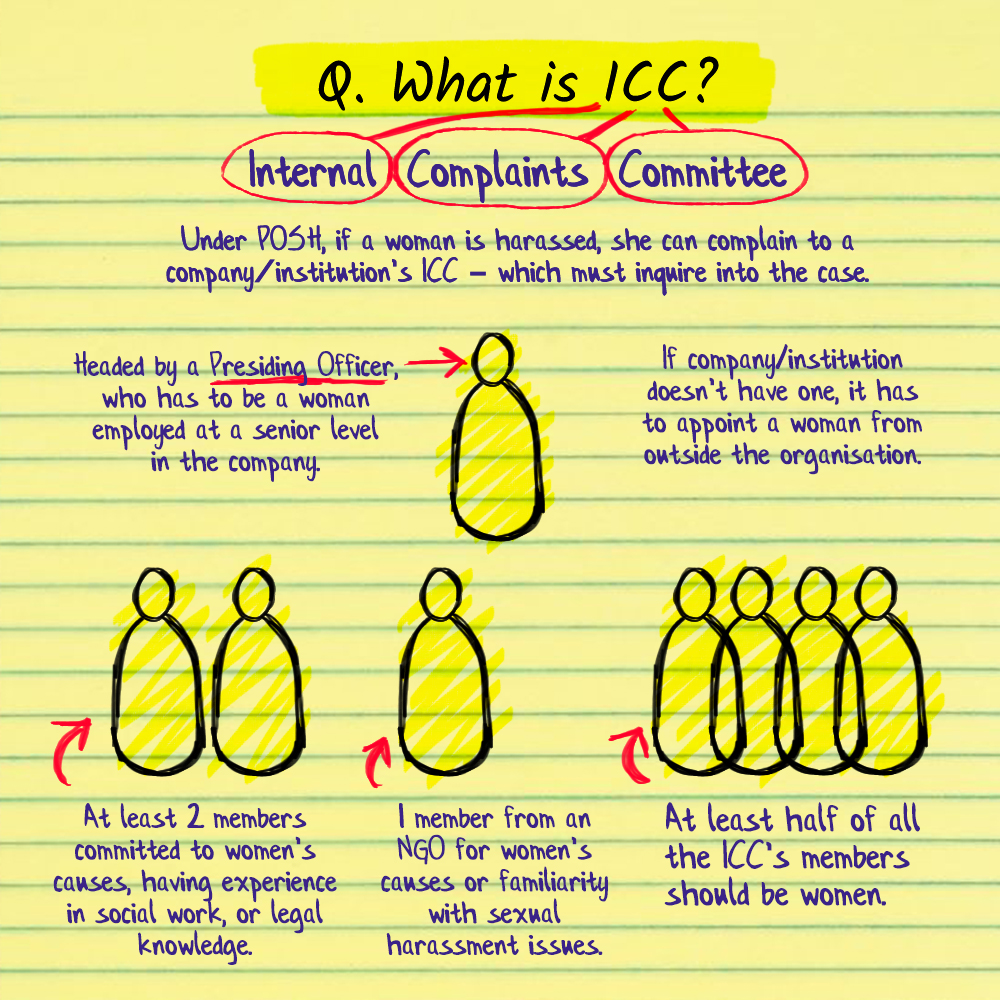 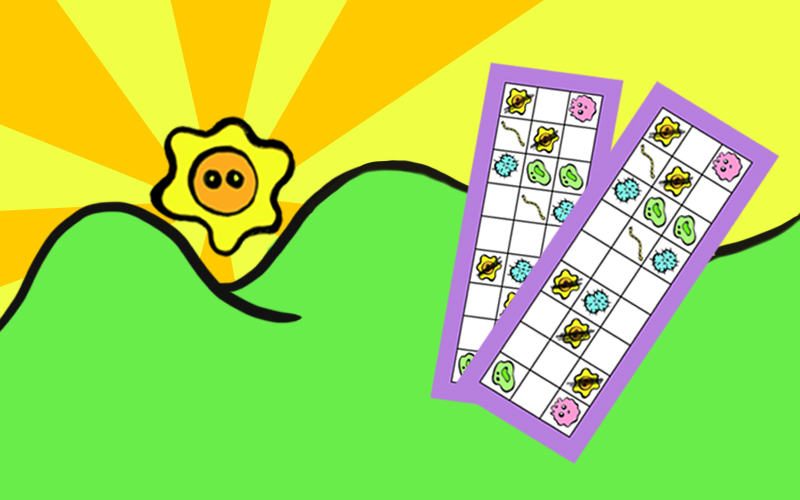