Why use condoms? Do condoms really kill pleasure? Answers to questions you feel embarrassed to ask.

Every year, there are many nudge-nudge wink-wink jokes about how condom sales in different parts of the country spike massively during Navratri. Condom companies have even confessed to increasing sales through discounts and other schemes during festivals. Par doston, don’t wait for Navratri to use condoms. Condoms should be used all year round, whenever you have sex. Even during oral sex.But first, what are condoms? They’re thin stretchy covers made out of rubber or other materials, and are meant to be put on the penis, kind of like a sock. They keep the sperm from entering the vagina because the semen falls into the condom after ejaculation.

Condoms are extremely useful as birth control, and can protect women from unplanned pregnancies. But even if you are using another form of contraceptive like the pill, condoms are important. Condoms prevent the body fluids — vaginal fluids and semen — from being passed on to the other person, so, not using them puts you at a high risk of contracting sexually transmitted diseases, or STIs (including HIV). It doesn’t matter if you were both tested for STIs two years ago, because HIV tests are only valid for three months after the last time the person had sex. So a condom is your safest bet. That’s not to say that there isn’t the slightest chance that something will go wrong if you do use one, but at least you would have taken the precautions.If you’re thinking you already know this and giving yourself 10/10, then good for you. But there are lots of people who feel reluctant to use condoms. That’s because of an old myth: that condoms take the pleasure out of sex.To ease the mood, how about an old video of Shekar Suman setting out to buy condoms?

Lots of men say wearing a condom makes them uncomfortable, that the material makes the sensation of sex less pleasurable, or that putting on one makes them lose their erections and worry about performance. There’s also the most extreme and illogical reaction to condoms: that the 30-second pause while you put one on is a ‘mood kill’.If you are having one or all of these feelings, it could mean that you are1) getting anxious2) distracted3) or simply not using the condom properly. Timing is everything when it comes to putting on a condom. If you try to put one on before you are completely erect, it will be harder to put on.How could you fix that? One way, especially if you’re young, is to practise using the condom — either while you’re masturbating or otherwise. You could also make sure you do longer foreplay, which would mean that both partners get aroused sufficiently and that you would be able to sustain an erection. The partner could also help to put the condom on.The other thing to make sure is that you put the condom on in the correct way.

How to use a condom

First, check the expiry date. Open the condom packet with your fingers — if you use your teeth you might tear it. Check that the condom isn’t inside out; the rim should be on the outside, making it look something like a hat that will unroll easily. Next, press the tip to make sure there isn’t any air stored in it, and roll the condom onto the head of the penis while it’s erect. (Before you place the condom on, you can add a drop or two of lubricant inside to help the condom. This will help the condom to roll on easier.) If you do put it on inside out the first time then it’s better to start again because there is a chance you might have got pre-cum onto it. Then, unroll the condom all the way down till the base of the penis.Here's a video that tells you how. Once it’s on, and if you need to, you can put some water-based lubricants onto them, although most condoms come with some lubrication. Avoid oil-based ones if you’re using a latex condom because they can make it break. Once you’ve ejaculated, you should take your penis out while it’s still a little erect, so that the condom doesn’t loosen and leak some of the semen. Holding on to the base while doing this could be good so that it doesn’t slip off. (That happens more often than you would think!)Even if you feel like you still have an erection and can keep going after intercourse, you need to change condoms after you’ve ejaculated.Use a new one whenever you’re having penetrative sex, and if you’re switching from one type of sex to another (anal to oral sex or the other way around).

There is a whole world of condoms out there for you to explore, with many different colours, flavours, and materials. Picking the right size and one that is a good fit is important. Most brands have condoms that come in small (less than 2 inches in width) regular, and large. If it’s too tight, it could decrease your blood supply, make you super uncomfortable, and even cause erectile dysfunction in the long run. If it’s too loose, it could slip off during sex.Latex condoms are the most widely available, but many men and women find that they are allergic to it, or that non-latex ones are more comfortable because they are thinner. Kohinoor, the international brand Durex, and Skore are huge brands in India, but Manforce (which has Sunny Leone in its ads), Moods, Kama Sutra, Cobra are pretty popular too. Durex is a little pricier — its ‘Superthin’ pack of three sells for Rs 50, whereas Manforce’s flavoured packs of three are Rs 22, and Kohinoor’s goes for 20.For the ‘mood kill’ brigade, there are condoms that feel especially ‘thin’; like they’re barely there. And long lasting or extended pleasure condoms tend to be on the thicker side, to help you ejaculate later (although some people say they desensitise your penis, make it numb, and can give you erectile problems). If you like experimenting with condom flavours for oral sex, there are tons to choose from, from jasmine to banana — Durex even came up with a baingan-flavoured one, as a joke to get people comfortable while talking about sex and protection. (Funnily enough, brand managers seem to think that flavoured condoms are all the rage in India. They make up 50 to 75 percent of the Rs 1,000-1,300 crore condom market.)Then there are the condoms with different textures. Ribbed ones have raised ridges around them and the friction is supposed to create pleasure for both the penis and the vagina. Dotted condoms also have raised dots or little bumps on the outside of the condom. Non-latex condoms are usually made of polyurethane or polyisoprene (which is rare). There are also the very rare lambskin condoms, which are supposed to be made from lamb intestines. What do you do if your partner says there’s no way he is putting on a condom? This sounds easier than it might be at the time, but telling your partner how you feel about not having protected sex is really important.What if your partner’s really pushy about saying they will pakka withdraw on time and that they don't need a condom? You’d have to explain that even if they did, there’d be the risk of getting pre-cum, which could make you pregnant. Either way, it wouldn’t solve the STI problem. Maybe you’re worried they will be offended if you talk about diseases or think that you’re accusing them of having one. But that’s why the conversation should ideally happen before you’ve begun the foreplay.If on the other hand, it’s a one-time thing, just be firm and insist. Or use a female condom. It's also best to keep in mind to not use the male and female condom at the same time because it may lead to friction which may cause the other to tear or slip off.

Sometimes called internal condoms, these are like soft pouches that you insert into the vagina. It has a ring on each end, and one end is closed. It comes in the usual sizes too, although women who have given birth recently are often advised to try the larger size. To use it, you have to find a comfortable position – either lie down or squat, hold together the side of the inner ring near the closed side of the condom, and put it into the vagina like a tampon. You then have to push the condom as far inside the vagina as possible. The outer ring should hang a little bit outside the vagina. (Here's a video on how to use a female condom.)Once the condom is inserted and you are ready for intercourse, guide your partner's penis into the outer ring that is hanging. Make sure that his penis is actually going into the condom instead of touching one wall of your vagina as well as the condom. To remove the female condom, grasp the outer ring firmly and twist it. This will keep the semen inside the pouch in the condom. Gently remove the condom from your vagina, while holding the twisted top of the condom. (Velvet, developed by HLL Lifecare Ltd, makes affordable female condoms in India and you can buy them online – a pack of three for Rs 95.)If you are menstruating and using a tampon, make sure that you remove it before you insert the condom.

Dental dams are a great concept: latex sheets that cover the genitals to make sure that there isn’t mouth to genital contact when oral sex is happening. Again, like with condoms, each sheet should be used only once. Dental dams can protect you from STIs that can be orally passed on, like gonorrhoea, herpes, hepatitis, and syphilis. But research says that less than 10 percent of women seem to use them, and it’s not clear yet why — one reason could be that oral sex is still not considered to really really need protection. Another is that the sheets are thought of as awkward and uncomfortable, and ruining the oral sex experience.You do not get these in India, but all you need is a pair of scissors and a condom to make your own. Unroll it, cut off the tip and the bottom, and then cut through one side of the condom cylinder you will be left with.Now that you know everything condoms and how to use them, there is no reason that you should wait till the next Navratri to start exploring. 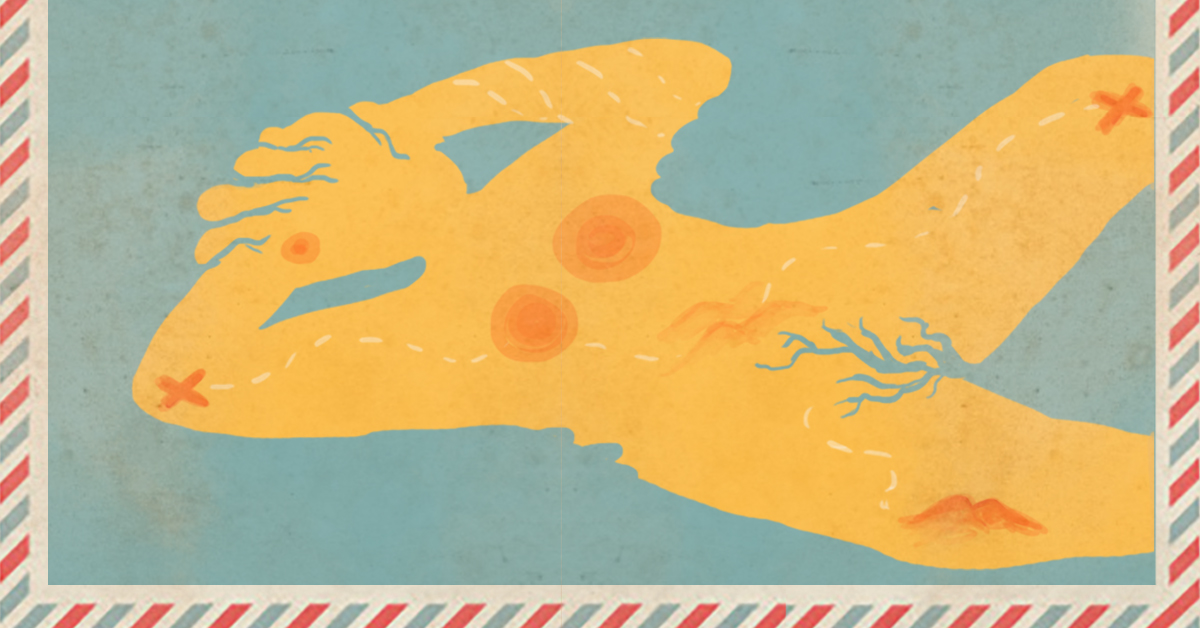 THAT’S EROGENOUS! THE AOI PRIMER TO THE BODY’S SEXY SPOTS! AOI's hot new guide on Erogenous Zones and where to find the…  03, Dec 2020 Small Doubts: How Can I Have Sex Without a Relationship? A new instalment of our monthly Sex Ett comic!  11, Apr 2019