My ButterBae, My Cabbage-Cabbage, My Little Jackfruit Seed: Love Words Around The World!

Do words in different tongues shape how we experience love itself?By Hamsi Manglani

Every once in a while, rediscovering the turns and bends of a language can reveal beauty that only comes from paying close attention. It’s the kind of attention one pays to one’s love interest in the hopes of reciprocal attention. And it’s the kind of rediscovery that to some people shines like a silver coin lying on a dusty, well-worn path.I came upon several such moments when I first started learning French. Made out to be amongst the most romantic languages, some of its expressions started revealing themselves, on second look, to be striking works of romance. For “they get along”, the French say “ils s’entendent bien”, which translates to, “they listen to each other well”. What more is there to getting along well than the primary practice of listening well? It was also around this time that I had been going through a very rough separation in a few close relationships, romantic and otherwise. Knowing French for “I miss you” added to the agony; the French equivalent “Tu me manque” is constructed such that ‘you’ (tu) is placed before ‘I’ (me). It seemed as if saying “You miss me” when, really, one meant the converse. “It’s ‘I’ who’s doing the missing... Not you!” I internally scowled at this lesson while projecting my own fear of not being missed as much as I’d been missing. A few weeks later when my French comprehension became better, “Tu me manque” revealed itself as actually standing for “You are missing in me”. You miss someone in their absence because it causes a lack of them inside of you. Getting to know it like this put a whole sparkling new spin on the core of my experience of longing and loving. The intensity of expression facilitated by language and its nuances was helping me process different, disconcerting, unnameable feelings.French has just one-third the vocabulary of English. This is how they cope with it: they use the same word to mean different things. The same word “baiser” is used to say both kiss and fuck. As scandalous as it may sound to some, for me it was a delight; a kiss alone can have the same blissful effect as that of having sex and fucking can have the tenderness of a kiss. It makes me roll my eyes several rotations over thinking of anybody who says or has said at one point or another, “But I thought it was just about sex.”Across different languages, words flirt with different meanings and meanings flirt back and together they make up word-babies! I had a sneaking suspicion of a theory: perhaps with different tongues, love itself tastes different? One may as well say that the way we love is flavoured with the way we use language. Further examination of love-speak in Indian languages was warranted, and I found myself with no shortage of examples to posit this little pyaar ke bol theory.A Maharashtrian friend once remarked, “We’re always so obsessed with the behaviour of the heart. The focus needs to shift to our livers; they regenerate!” Marathi-speaking folks will relate to the expression “majhya kaljaacha tukda” which means “a portion of my liver”. Sometimes to address one deeply cared for, you give love a new address. Another Marathi usage strikes me as a fitting description of attachment, especially of the romantic variety – “tujhyat jeev adakla”: my life is stuck in you. It acknowledges the magnetic hold of love that makes it difficult to separate your life from your lover’s.And speaking of being stuck, this Sindhi expression illustrates the stickiness of longing: “tunji sikke ti lagey”. Your “sikke” has got to me. “Sikke” is one of those words that can’t fully be translated into any other language. As baffling as it may seem, the word in English that comes closest to describing this feeling of deep nostalgia is “homesick”. Word-twins born in widely different cultures. I cannot help but associate this feeling with the ‘sik’ sound that closely resembles a breathful of sobs.While pouring out her heartache, a friend once pointed out that phrases in English often go limp when trying to accurately describe the force with which it hurts. In her mother-tongue Gujarati, they offer consolation to a person going through trauma with the expression “jeeva kai bade chhe”, which is to say, “why burn your soul”. She says that it makes her feel that her suffering is understood by another, that some heartache actually feels like one’s soul is on fire. Sometimes, in love, words are all the support we can get. If the words above can be used to speak of love with intensity, here’s one with a lightness that is irresistible. Have you ever wanted to call your ‘chitchor’ a heartthrob without saying it sappily, like “dil mera churaya kyun?” Well, I have, and I used to think the English term ‘pirate’ would have to be somehow packaged cleverly into a sentence for my object of affection to ‘get it’, until I came across this drooly-wooly, ear tickling, tongue-rolling Malayalam endearment: “kochu kallan”. It is quite rightly used to call a loved one a “little thief”. I’m going to have to teach myself not to overuse it.We hold inside of us a wide landscape of feelings. It is for our private selves to know for whom the river flows, who makes our volcanoes erupt, who we seek at the bottom of the valley, whom we meet by the shore at high tide. And sometimes we gift another words, like a map, so that they can meet us there.One method is to tinker with the ending of a loved one’s name. So that’s how my Shradha becomes Shradhupudu, a Riyaz becomes Rizu, my sister with her Punjabi name Lavleen becomes Lavlya to her Maharashtrian friends, a Pahadi named Indu to her close ones becomes Induli, a Marwadi Chandan becomes Chandudo, and so on. Another way is to assign nicknames, and we all know how dazzlingly that goes for Bengalis.Yet another method is what I very naughtily call: One person’s edible is another’s eatable. While learning French I learnt that “chouchou”, pronounced “shushu” and which means “cabbage cabbage”, can be used to refer to one’s sweetiepie. I had found justification for the times I’ve told my little cousins that they’re so cute that I’m going to gobble them whole. Deeper examination of my wobbly-but-cutesy little theory has brought me to infer that the impulse to relate a loved one to food is a common one.Taking up roly-poly Malayalam again led me to “chakkakuru”. I was quite impressed with the sonority of the word alone, before I found out what it meant: jackfruit seed. The woman I learnt this from called her pet dog this. For those of you who haven’t seen jackfruit seeds, they look like smooth, round pebbles with which you want to fill up your pockets and when they’re full, you collect more inside jars. Just when I was convinced that this is what I’m going to call the jackfruit of my eye, I heard a slightly different version of it. Kunju (kun-nyu) chakkakuru – little jackfruit seed. If you’re not going to name all your kids this, I hope you find cuter food with which to call out after them.I once went to a lavani performance that made every tuning fork inside me turn. Lavani is known for seducing audiences with the most delectable lyrics and raunchy double entendres, but this one was special. It went along these lines: Why go after Alphonso mangoes? You can’t even afford those. So come close and take this amba totapuri (Totapuri mango) instead. The woman in the lyrics has no hesitation in suggesting that she’s the cheaper variety of mangoes (or her breasts are). Totapuri mangoes are known to be juicier and have a more pointy end. It lent a spunky new meaning to what’s otherwise written off as “cheap”, while also showing that our loved and cared for bodies can have delicious names too. 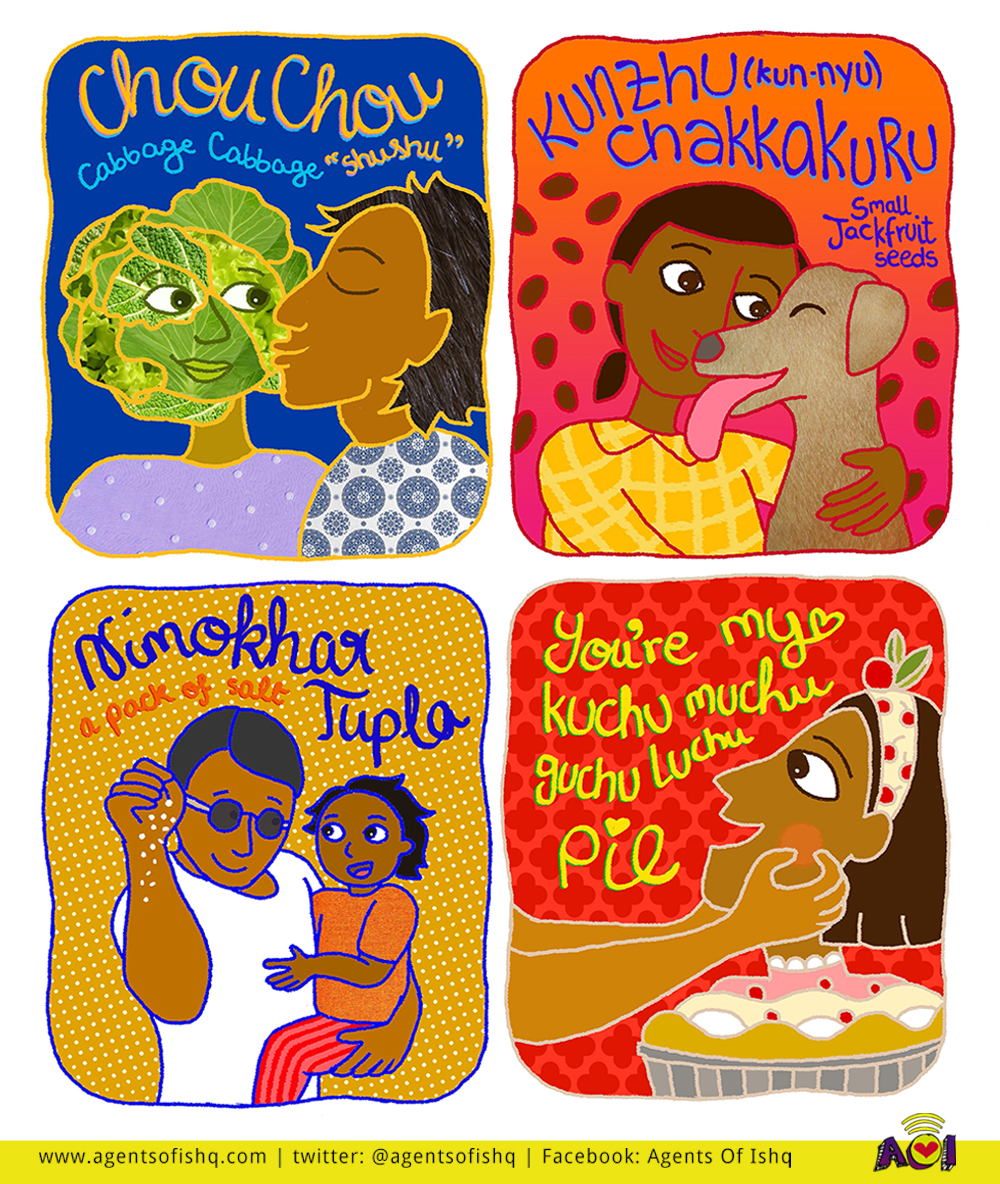 Before I found out that “Makkhna” was the title of a Honey Singh song, I’d always heard this Punjabi endearment used tastelessly in many a Bollywood number. But makkhna, like its namesake butter, refers to an edible lovable person who is soft, irresistible, hard to say no to and, when warmed, sizzles into a golden mess. And like butter, salt can add a lot to a dish. “Nimokhor tupula”, Assamese for “a pack of salt”, acknowledges that love is not restricted to all things sweet. That’s to say, affection comes for and from difficult people too. Each language, like each cuisine, seems to have its own menu. And in love we’re allowed to cater to different palates.Sometimes this could mean a mix-and-match, smorgasbord approach. Sometimes this means going off the menu. We often make up names for our loved ones; for my lazy-bum friends, a quick snip does the trick – they’ll slice off each others’ names by half, adding in its place their right to do so. Vatsala is Vats, Priya is Prie, Avani is Avu, Arora is Rors, and so on. But then for some of us, this method of chopping doesn’t ‘cut it’. For such people exist things like the strawberry shortcake song! Remember “You’re my cuppycake, gumdrop shnoogums-boogumsh”? (It was very popular right at the time cellphone ringtones could be customised.) In other words, the limitations of language sometimes lead us to form love’s own private language: one where its participants could be builder-doctor types but could also be creative types in that they engineer new terms altogether.According to Roland Barthes, a French literary smart alec, all talk of love is just repetition of things that have already been said or expressed. But I don’t think that’s true: people seem to invent their own language, keeping up with newer tectonic shifts on the planet of desire, and this varies from language to language, lover to lover, beloved to beloved. We shape language, and perhaps that in turn shapes the world itself.Hamsi is the author's actual name (ask her for its story). She thinks of herself in compound words like oldsoul, twentysomething, lustqueen, griefstar. If you make up sweet names for her, it'll go to her head.
Score: 0/
Follow us: Sexual Resolutions for A Sexual Revolution, Anybody? And Happy New Year, Everybody  Dec 30, 2015 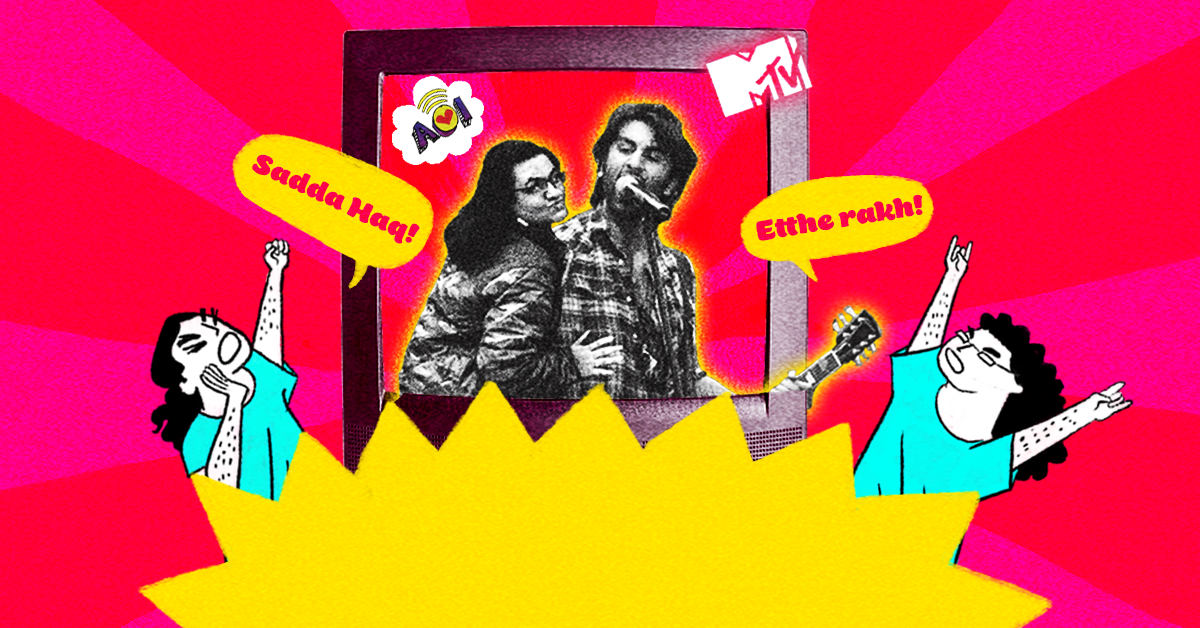 Songs that Helped Me Be…Hopeful The soundtrack to Apurva Paithane's adolescence!  Jun 05, 2021